With neat performances from the lead cast Thozha provides some very good moments. Excuse some flab and this film definitely strikes some chord. (more)

Karthi and Nagarjuna's celebration of life deserves your time.

Thozha is a simple story of a bed ridden middle aged man and a free spirited young man. Does the difference in their lifestyle, age, physical condition come in between the bonding they develop? Watch the film and learn that!(more)

hozha suffers with its unusually long run time. Indianizing this French drama includes slotting in songs. Unfortunately, songs are thrusted at wrong places, breaking the flow of the movie. Perhaps, if editor Praveen KL had shortened the length of the film, Thozha might've turned into a special comedy-drama, which then would've been breezy in nature. (more)

Thozha is easily one of the finest performances from Karthi, he steals the show with a pich-perfect performance. His comic one liners and sparkling screen presence are a major plus. What a spontaneous actor he is?Nagarjuna has made use of all his expertise in the film that he shines with his subtle expressions and the effort he has put in to dub his own lines too definitely deserve an applause. (more)

It is a neat emotional tale between two men from drastically different backgrounds and facing different problems but connected by the affection for each other. The film has a touching emotional content that thankfully is largely underplayed and never touches melodrama.(more) 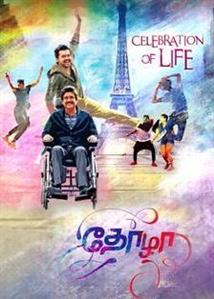