Appreciate the attempt not the result

rankly, the interest in Roy piqued only cause of Ranbir�s inclusion into the cast - despite the national award Arjun is not a draw nor is Jacqueline. That is the biggest undoing of the film. One expects lot more from Ranbir, a cameo being extended in a soulless movie is not what we look forward to. While crowds filled in the first day shows, there will be a backlash for sure. Yes Ranbir does look edgy but then that is all one can say good about this bad experiment. (more)

Roy is purported to be a romantic thriller

Roy has many moments of silence and that is one of the few saving graces of the film. It eschews melodrama, does not let the characters hyperventilate their emotions, and opts for a soothing, restrained background score that supplements the film's languid pace. The performances, on the other hand, aren't spectacular but are adequate. Ranbir Kapoor can light up the screen with his expressive eyes and impish grin even when nothing else seems to be happening. The director, who is also the co-writer of the dialogue, knows the primacy of a kahani, if the lines his characters spout are any indication. He does not, however, follow it up with tangible action. One character puts it unambiguously: if a story is not going anywhere it is best to cut it short. But where, pray, is the story in Roy? Recommended only if you want to use the auditorium for a relaxing catnap. Roy will not wake you up.(more)

What is Ranbir Kapoor doing in a movie like this?

Nothing does. The good-looking actors loll about in good-looking locations (mostly in Malaysia, and we aren�t surprised when the leading lady bestows fulsome praise upon the country, which will presumably lead to much tourist traffic) and talk, talk, talk in sombre tones. Verily, it is a gabfest, and you want to applaud�finally, a movie in which people, you know, talk, but you realize soon enough that all that chatter is empty(more)

It is not a story that needs to be a heard or watched, it�s just something random!

Roy is at the core of it all a love story which finds a mysterious representation. If you are bored of watching cheesy romantic films and wish to watch a film that apes Hollywood style story telling with a desi plot, this one is for you. Could make up for a Valentines watch minus all the �mujhe tumse pyaar hogaya hai� type drama.(more)

It's appalling Roy made it to the cinemas

he best part of the film is the music but the songs come so abruptly and are totally out of place for anyone to enjoy. I'm told releasing a film is not easy. One has to have a good story, get the cast in place, and convince a producer to back it and then get a studio to release it. After all kinds of checkpoints it's appalling that this film has made it to the theatres. (more) 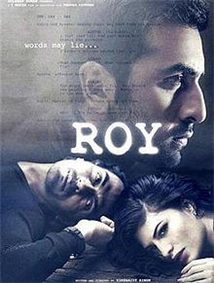