worth watching once ! Siddarth looks cool in both the role. unexpected twist in the climax with colors but feels bits lengthy (more)

a different think like first heart touch movie when i see this flim...... (more)

A CV kumar film is fast becoming an enticing offering for the logical movie goer and couple it with Siddarth's knack of choosing content heavy scripts as evident from his last two outings and the classy bgm thats guaranteed from Santhosh Narayanan, you just cant giving the movie a skip. From the outset, we are shown Siddarth playing the role Vignesh to be hospitalised and a special Police officer being appointed to investigate the reason behind his present plight. Post which the movie doesnt waste any time in introducing the audience about the dream pill called Lucia and how it assists our insomniac protagonist to seemingly craft the life he would rather wish to lead ,albeit , while asleep.While Siddarth in reality works in a theatre as the 'torch bearer' , in his dreams, he visualizes himself to be what he yearns to be,a Superstar.The byzantine screenplay moves back and forth brilliantly between his reality and dream with the scenarios laterally inverted with respect to each character.For instance,Durai who is Siddarth's boss in reality becomes his manager , and Deepa whom Siddarth tries to woo in reality becomes a fan girl in his dreams.The fantasy sails smoothly until there is a misunderstanding between the star and the fangirl over the latter's ambitions in becoming a top heroine.Meanwhile at the stroke of the interval , we are shown that the heroine's attempt to kill the hospitalised Siddarth. What causes her to do so and what happens to the star and his love interest in the dreams is intelligently revealed with a surprising twist reeking immense creativity. Coincidentally or otherwise,there is a scene towards the end of the movie that sort of pays tribute to Leonardo di Caprio's role in inception with the protoganist washed aside by the beach as he wakes up to what he thinks is reality. That an Indian movie could even attempt to match the smarts of an all time Hollywood classic is a testimony to the ingenuity of Pawan's script. Do not miss this latest offering from Siddarth pulling of roles that are poles apart ! (more) 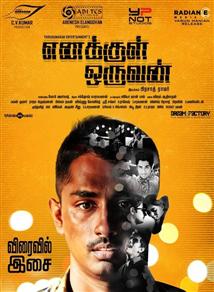