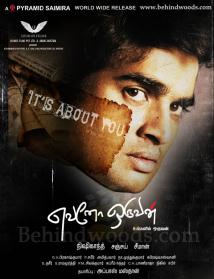 Madhavan and his `Leukos Films` can be proud that they made Evano Oruvan, a gutsy and outstanding film. Maddy (also the dialogue writer) and Nishikanth has shown us that cinema can throw light on things you and I ought to know-- they call it social reality. Evano Oruvan may be a bit slow but it must be watched by anyone who cares for cinema of sense and substance.(more)

Evano Oruvan (Someone), directed by Nishikanth Kamat and the Tamil version of the Marathi trendsetter Dombivli Fast, asks certain pertinent questions that usually crop up at least a dozen times in every normal man's day -- but are never given their due. The screenplay ought to have been tightened. Madhavan's dialogues, though (he's translated them from the original Marathi) are sufficiently free of clichés, which actually make you sit up and think about the issue addressed. (more)

Nishikanth Kamath has successfully depicted the pressure undergone by an ordinary citizen, who wants to live according to the laws and rules. The metamorphosis of the protagonist is convincingly portrayed. The director has conceived and executed many scenes well. The director however, slips in his approach to the script and the concept. There is no doubt that Nishikant has made an honest attempt to highlight the darker side of you. (more)

Miss this at your own risk

The Director’s conviction on the subject is totally evident, delivering a riveting two hours of entertainment. The recent increase in non-commercial formatted movies becoming big hits have indeed made directors venture into unexplored territories. Evano Oruvan has the ingredients to become a trendsetter on its own right and if it can manage to generate some good word of mouth early on, trade prospects looks good too. (more)

Maddy's efforts for Evano Oruvan are special. He has distributed the film through Leukos Films, his new production company and has also written the dialogues for the film with director-turned-actor Seeman. His hard work has contributed a great deal to the film's appeal. The dialogues are sharp and precise. Evano Oruvan is a barrier-breaking effort that sets an exemplary model for new-age commercial cinema. (more)

For you, about you