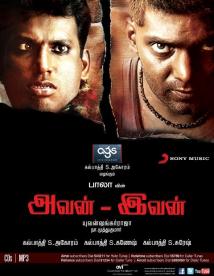 Avan Ivan is Bala's first commercial cocktail. There is no story or script. The lead actors along with a fantastic supporting cast of Ambika and GM Kumar make the film work with their outstanding performances. The whole film seems to be made to give Vishal a big boost as an actor of substance. Arya is a perfect foil to make their on screen chemistry crackle. Yuvan's music is nothing much to write about. Arthur Wilson's camera is fantastic. Suresh Urs editing is crisp.(more)

Avan Ivan does have, at its heart, a nice storyline with plenty of comic elements. But director Bala doesn't really capitalize on its strengths, and never pulls you into the story except in parts which is disappointing, as he is among today's trend-setters in Tamil cinema. Arthur A Wilson's cinematography is slick; Suresh Urs's editing serves the purpose. Yuvan's music itself fits the film, even if the background score doesn't elevate itself to brilliance. Avan Ivan may look good on paper but fails in execution.(more)

Bala and his boys.

Avan Ivan is like a marriage between commercial cinema with the signature style of Bala. The ace filmmaker has woven the script in such a way that there are no dull moments and the wafer-thin storyline does proceed without any lag. Vishal is outstanding. Arya is cool, casual and is at utmost ease. The real scene stealer is G M Kumar. Watch out for Yuvan Shankar Raja's background score that reminds his dad Ilayaraja in his prime form.(more)

It's worth mentioning that the film completely belongs to Vishal. His power-packed performance leaves us astonished. Unlike Vishal, Arya doesn't have much scope over performance, but manages to remain under spotlights with his rib-tickling comedy tracks and dialogue delivery. The versatile filmmaker-actor G.M. Kumar steals the show with his effortless performance. The writing, which lets down the movie big time, turns out to be erroneous, as the screenplay remains vague and directionless. Yuvan’s background score does influence the visuals.(more)

Avan Ivan is a good watch.

Bala's characters are powerful, but in this film, they seem to lack a gripping storyline compared to his earlier movies. Vishal, Arya, G.M. Kumar and veteran actress Ambika are the prominent characters. Arthur Wilson shoulders Bala's love for the luscious landscapes, while Yuvan's music combined with Vishal and Arya's dance numbers are straight out of the streets. Avan Ivan is a good watch, hence Bala has successfully reused his tested formula. (more)

Watch it, for Vishal.

Vishal looks invincible. Hats off to the actor for an excellent show! Aarya is a perfect foil for Vishal. Heroines Madhu Shalini and Janani Iyer have little to do. 'Super' Subbarayan warrants mention for the intensity of the stunts. And Yuvan's re-recording is a definite plus. The intermission leaves you wondering at the frivolousness and facileness of the story that's very much unlike Bala. Thankfully, he makes amends with a riveting climax.(more)