Kayal Review - A worthy addition to Myna and Kumki

Kayal -  A worthy addition to Myna and Kumki

Prabhu Solomon's filmography is rather interesting. The first phase started off with the slightly offbeat Kannodu Kanbathellam and King. He then turned the action route with Kokki,Lee and Laadam. His current phase that started with Myna is his most successful and has him delivering hits with love at the epicenter - accompanied by beautiful visuals and enchanting music. Kayal definitely follows suit.

The best thing about Kayal is the characterization of the hero and his friend. They play partial vagabonds who slog for half a year and then spend the remaining half with the money earned, visiting every nook and corner of the country exploring places and enriching themselves. Their conversations with people they come across make a lot of sense and their idea about life is full of positivity.

The humour in the first half of Kayal stands out. And there are no comedians as such. More exciting is the fact that all these laughs are packed in at the most precarious situations including an interrogation at the police station and amidst a family of short tempered people where a girl has eloped. The humour in Kayal is certainly a few notches above Myna and Kumki.

The unfortunate irony in Kayal is that the hero who brims with confidence and refuses to put on  even a frown on his face at times of adversity, turns into someone who would weep all the time as soon as falls in love. And it is not even unrequited love. It is just that circumstances force him to be on the search of his dear one. For someone who is shown as not fearing even death this looks unnatural. More so striking is the fact that he looks least bothered about his friend after the tsunami attack and is only on the lookout for Kayal.

Both Chandran and Ananthi are brilliant and extremely expressive. They emote well and realistically that even some of the melodrama appears believable and toned down. Almost every actor looks the part. Save Arthi who plays a short tempered lecturer every other character is well etched. The hero’s buddy, the slightly off elder who takes pride in his attire and the kind hearted lorry driver are few that deserve mention.

As always recently Imman is on top of his work. The songs and bgm make Kayal all the more a pleasant outing.

With an excellent first half and a slightly melodramatic second half Kayal is a breezy watch and surely another winner from Prabhu Solomon. 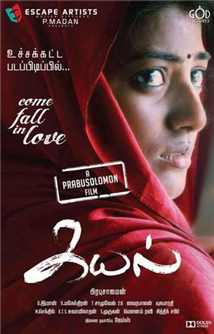