Hrithik Roshan and Katrina Kaif's action romance flick Bang Bang directed by Siddharth Anand hit the screens on October 2. The film turned out to be highest opener ever in Hrithik Roshan's career. The film had done extremely good business in its opening week and is currently in its second week. Bang Bang had raked in the moolah both at the domestic as well as overseas market.

The film made on a big budget of Rs, 140 crore has also managed to movie into profit in the first week of release. Bang Bang is produced by Fox Star Studios.

At the end of the first week, the film collected Rs. 127.44 cr and turned out to be the third highest grosser of 2014. The film has collected Rs. 161.78 cr till Tuesday. And if you start adding up the overseas collections, then the overall figure climbs up to Rs 304 cr.

'Bang Bang' can continue its run for one more week without any stiff competition as the next big release will be Shah Rukh Khan's 'Happy New Year' which will hit the screens for Diwali. 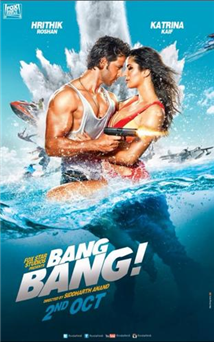