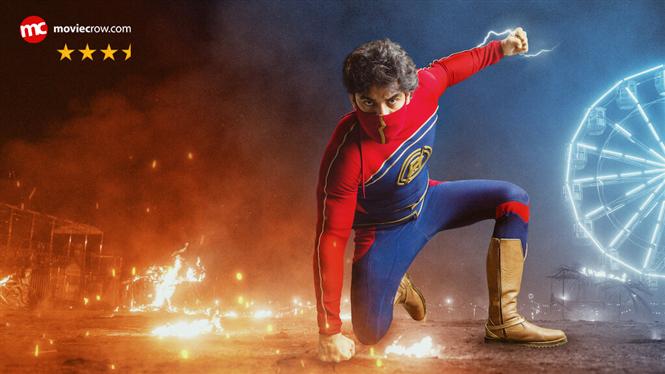 Until very recently you might have often heard conversations about why we don’t really need our own superhero films. The argument for it was that our mass heroes themselves defy all scientific laws. Our quintessential mass hero film more or less doubles up as a superhero film minus the mask and the cape. Of late, we have been seeing how our action stars are being more grounded and trying to reinvent themselves within the mainstream action template (this is true at least with respect to Tamil cinema, something I am more familiar with). Minnal Murali has probably arrived at the most opportune moment.

Any superhero origin story more or less follows a template and you do know how things are going to pan out. So, the ‘what’ is always known. The ‘how’, and more importantly ‘how effectively’, is what matters. And Basil Joseph and his team have certainly hit the bulls-eye in this regard. Minnal Murali is a film about Jaison (Tovino Thomas) just as it is also a film about Shibu (Guru Somasundaram). Both their stories run in parallel and until the final showdown, Minnal Murali never plays out like a good vs evil battle. Guru Somasundaram is brilliant as the shy Shibu who is genuinely in love with someone. The film never treats him as the bad guy. In fact, if you draw parallels, he seems to be the better person when compared with Jaison on most counts. He never disturbs the girl he loves. He genuinely cares for her and isn’t just trying to attain her. His killing spree in the climax too is portrayed as the act of someone who has lost his mind. Guru Somasundaram makes Shibu endearing and in fact, it feels as though the Shibu - Usha love story deserves a separate film. Sometimes it is easy to be biased towards a serious performance and forget that that what Tovino does in Minnal Murali is no less either. As Jaison, he sparkles with energy and plays the superhero with a childlike charm. He is terrific with his comic timing.

Minnal Murali is a very entertaining film. In fact, the superhero angle only kicks in after sometime but we are never really waiting for it, as the humour works big time in the film. Be it the references to superheroes from Marvel and DC or the casual dig about how America is surviving because of these superheroes, there are so many little jokes out there and the humour is always understated. Vashisht Umesh, the kid who plays Josemon, deserves special mention for his nonchalant performance.

For what seems like a lightweight superhero film, the film actually packs in a lot and there are a lot of nice little ideas. Be it the ‘Bruce Lee’ character played by Femina George or the fact that Jaison actually gets his superpower on Christmas eve or even the seemingly silly ‘abibas/adidas’ joke. Jaison keeps aspiring to move to America and ends up staying back at home. This probably works as an analogy for having our own superhero. Maybe, abibas is as good as adidas!

There are a lot of takeaways from the film but this one was my favourite. No superpower can probably stop you from having biriyani at your ex-girlfriend’s wedding!

Minnal Murali is a very satisfying and entertaining watch. The film respects its audience, the genre and itself. Basil Joseph has kept it simple. Maybe keeping things simple is a superpower that we all have but fail to realize!