Atrangi Re Review - A bumpy ride that is enjoyable in parts 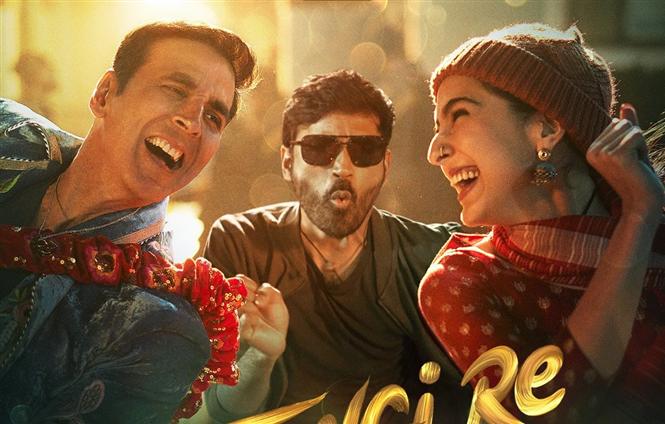 Atrangi Re – A bumpy ride that is enjoyable in parts!

Aanand L. Rai wastes no time and within few minutes into Atrangi Re, the film is already up and running. You do not get time to dwell on what is happening. Everything seems a bit weird and illogical but Aanand L. Rai has already succeeded in transporting you into this weirdly funny universe. Everyone seems a bit hyper and this sort of a setting can easily be annoying if not done right. And most importantly, it is the casting that needs to be spot on and it mostly is, in Atrangi Re.

At the core of Atrangi Re is something very emotional and is about someone trying to find an escape route from a childhood tragedy. The film devices a wacky ploy to explore this theme and what we have is a love triangle at the forefront. Both Sara Ali Khan and Dhanush are very good. Sara makes Rinku instantly likable. This greatly helps us in getting over the fact that Vishu (Dhanush) falls so easily for Rinku. Dhanush is an effortless performer and it is good to see him in a romantic role, something that we hardly get to see in his Tamil films. Akshay’s part as Sajjad is more or less a cameo but he does leave an impression in the climax.

A. R. Rahman is in terrific form and is one of the reasons for you to remain invested with the film. His score creates a buoyant mood and it has been a while since I felt this while watching a film. Atrangi Re remains entertaining in its lighter portions but the film does lose steam post the big reveal. It now wants to be emotional but despite us buying into the conceit, the emotional scenes hardly work. Though it might not be the film’s intention, it does come across as though Vishu wants to win over Rinku while what we should have actually felt is Vishu wanting Rinku to get over her trauma. And with Vishu being a doctor, these portions probably needed to be handled with a lot more care. The entire stretch of Rinku moving further and further away from Sajjad doesn’t really work. But the film gets it right once again in the climax, where the emotions work big time.

I really liked how the film possibly took a dig at people who try to project an arranged marriage or a marriage of convenience within the caste structure as a love marriage.

A terrific score from A. R. Rahman, some pleasing performances and a buoyant tone ensure Atrangi Re remains enjoyable for the most part. The film does slip and keeps wavering towards the later half before coming together in its climax.