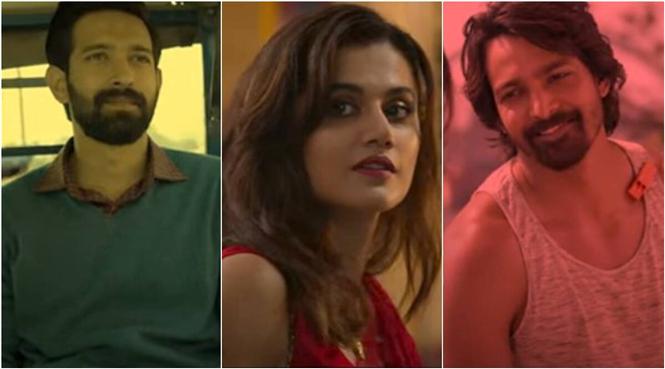 It is tough to slot Haseen Dillruba into a genre. It starts off like a quirky comedy, ventures into the thriller zone and ends as a romance. Whether all this comes together successfully is a question mark but the film does entertain!

An adventurous girl (Taapsee Pannu as Rani) gets into an arranged marriage with Rishu (Vikrant Massey) who is or atleast seems like a meek guy. The couple isn't able to get along and at this point enters Neel (Harshavardhan Rane) and things get serious.

The initial portions of Haseen Dillruba are some real fun. The setting is quirky and a little over the top and the actors are in fine form. The film flounders a bit when Neel enters into the picture. It is not about what happens but the entire episode sort of looks rushed. That Rani is yearning for physical intimacy and is attracted to Neel is fine but that she gets emotionally involved doesn't come across convincingly. Maybe she is an impulsive person but we never feel the vibe between the two. In fact, despite their troubled marriage and lack of a physical relationship, the sexual tension between Rani and Rishu is more palpable than whatever that exists between Rani and Neel.

Tapsee has a lot of fun especially in the first half. Her performance is designed to be over the top and she pulls it off convincingly. Vikrant Massey is terrific in a role that is in contrast to the general tone of the film. Yamini Das who plays Vikrant's mother is another actor who stands out in the film.

The film's Achilles heel is that some of the decisions that Rani takes and the sudden changes in her character arc on more than one occasion appear forced. So is Rishu's brief sadistic turn. Given the nature of the film, this isn't a deal breaker because from the beginning there is a sense of quirkiness in this make believe world. But the transitions don't come across as seamless as they ought to have been for the film to be several notches higher than what it is at present.

Haseen Dillruba is a bit uneven and unconvincing at times. But it has it's moments and is entertaining.