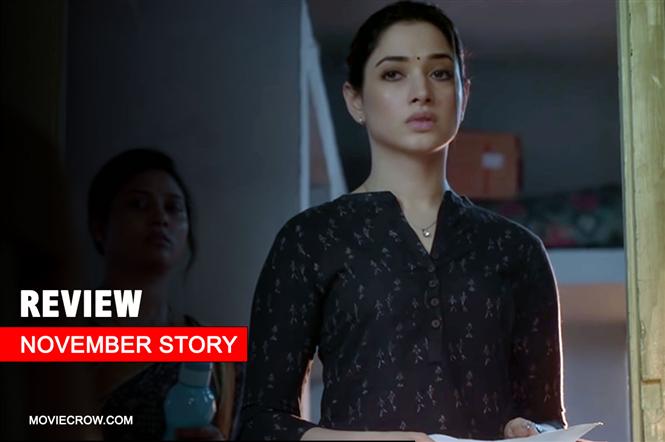 Disney+ Hotstar’s latest Tamannaah starrer is the thriller series titled, November Story that has just hit everybody’s OTT screens. The ensemble cast including GM Kumar, Pasupathy, Vivek Prasanna, Aruldass and many others focuses on a murder that takes place in a very old house owned by Anu (Tamannaah). Also talking about mental instability, autopsy doctors and Cerebral Palsy, this series also gets a medical angle to it. Does this new web-series directed by Indra Subramanian engage its audiences?

November Story deals with Anu and her father (GM Kumar), who is a crime novel writer suffering from mental health issues like hallucination. Incidentally, Anu wants to sell off their age old house while her father (Ganesan played by GM Kumar), disapproves of the same. Now, there is a murder to add to this and the entire police department headed by Aruldass (Inspector Sudalai) try to figure out the murderer. The irony of it all, the murder happens in this age-old house on a particular night. There is another subplot that deals with Pasupathy (an autopsy doctor named Yesu) and a young bunch of boys from Hyderabad Medical college, with charges of murder on them. How these subplots are interconnected and who is the murderer forms for the rest of the story.

Agreed, there is abundance with respect to the number of subplots and characters that the audience have to deal with. There is a suspense held together for a large fraction and there are not many deviations in the form of attempted humour or unnecessary diversions from the storyline. But this alone cannot ensure a gripping viewing experience. Though fairly engaging and intense towards the latter part of the series, one might be caught in confusion at many junctures in the first few episodes, solely due to a misaligned sequential shift between the many subplots on offer. As for the casting equation, GM Kumar is gold, as he plays Ganesan to perfection. He is in top form right from his ‘Avan Ivan’ days and maintains an eerie mood. Tamannaah as the title character ‘Anu’ tries to be a tad bit too subtle and her voice modulations seem extremely calm and quiet. This could work for a few but some may feel she could have been a little more emotive. Vivek Prasanna as her colleague and friend in the cyber crime department does a neat job and Pasupathy aces his role as Yesu. A couple of characters that travel along with Inspector Sudalai try to make you laugh here and there but to no avail. Even the college students are functional.

There are a few interesting scenes in most of the episodes of November Story. For instance, each episode begins with a black and white flashback portion and then translates to the present. Some of the mention worthy scenes include the pregnancy portion, an emotional outburst between GM Kumar and Tamannaah and the penultimate episodes’ twists that reveal the ‘what’ and ‘why’ of this medical murder mystery. However, some character building scenes (especially in the cyber crime department and police station) test your patience.

Technically, November Story sails above the water. Cinematography by Vidhu was impressive, especially in the flashback portions in the hospital. Edit could have ensured a slightly better pace. Music too adds much required tension and intensity at many points. The dark, eerie bgm works well and the colours avoided, surely make for a good decision.

On the whole, November Story by director Indra and the Vikatan team is a little here and there in terms of its impact on audiences. There are gripping moments, numerous characters and storyline connecting dots, but just a little haphazard at a few instances. If not for this disconnectivity and predictability at places, it is a worthwhile watch with a very good crux and storyline backed by some decent performances.

Verdict: November Story, is a watchable experience with a fair share of gripping engagement and the occasional predictability that peeps in! 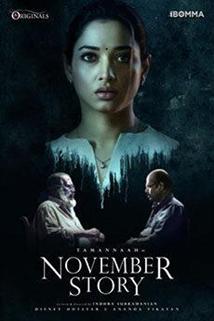