Teddy Review - A not bad entertainer that works as an undemanding watch! 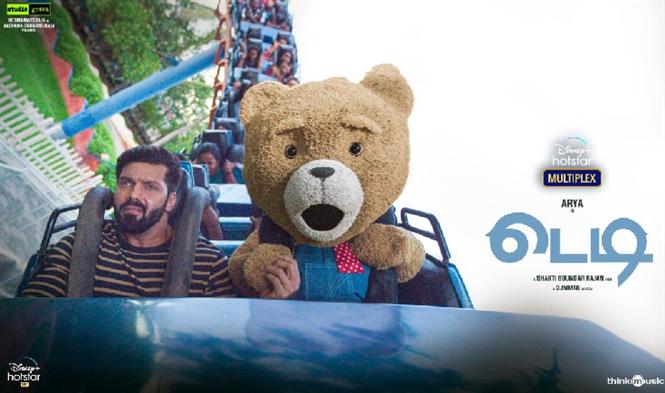 Teddy - A not bad entertainer that works as an undemanding watch!

Solely on the basis of the kind of films he does, Sakthi Soundar Rajan's filmography is an interesting one. You might dislike the films and debate about the silliness or how they are the dumbed down versions of Hollywood films or ideas. But to side with him, he sort of atleast has an idea of what he is trying to do and is consistently grappling with these ideas. Teddy is another addition to these 'inspired ideas'.

Arya's intro happens few minutes into the film after the premise is set up. We have had sidekicks and even villains heap laurels on the hero (Remember Vivegam? But was Vivek Oberoi the villain or a friend? Smart move by Siva). But here the hero takes the onus on himself. These are the ways in which he humbly introduces himself to us - 'Brain ku theeni podrathu thaan en velaye'. 'Maasathukku oru topic eduthu master panniduven'. Basically he is a human form of Chitti. While Arya maintains a straight face through all this, it certainly wasn't so easy for me. It looked like a scene straight out of a C.S. Amudhan film except the fact that we aren't watching a spoof. Thankfully, this was soon done away with and the film did get not go back into this 'hero worshipping himself' mode.

Teddy is a pretty straightforward film despite the sci-fi/supernatural space it operates on and that works in its favour. It is the sort of film that should work for kids and for adults wanting an undemanding watch. Given the current exploits in visual effects, a teddy moving around with life isn't something that is going to make you sit up. But the film focusses more on the relationship dynamics between Arya and the teddy and this it does pretty well. The first half gains momentum nicely and ends with a neat interval point. The film now moves into foreign territory and is basically about how Arya and teddy nab the villain. Now, how much this half works depends exactly on what I meant earlier - how undemanding are you? I did not mind it at all. Given the fact that by this time you have already suspended disbelief with a talking teddy, the film does cruise through pretty fast and gets the job done. Far fetched and too simplistic? Yes. But we have had heroes in many serious films (atleast relatively) do more crazy stuff without breaking a sweat. At least over here, the tone is still that of a kids friendly film.

If you read the synopsis and go in expecting an action thriller of sorts, you might get disappointed. I really liked the fact that this film had an interesting premise, kept it simple and sort of does reasonably well whatever it had set out to do. It is a kids friendly film in tone (though the subject of illegal organ trading isn't) and as such, it is a watchable entertainer for the undemanding.