Triples Review - Watchable mainly because if its liveliness! 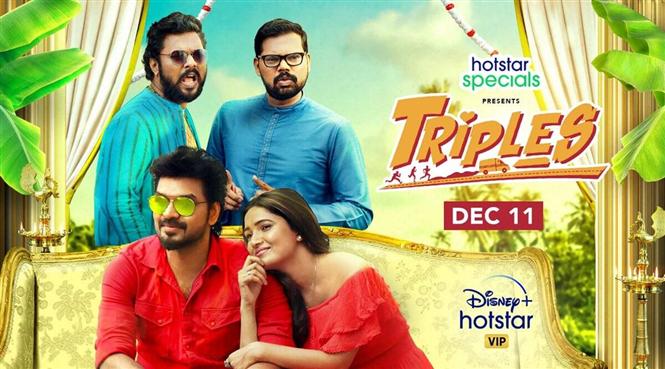 Triples - Watchable mainly because if its liveliness!

Let's be honest. Forget good or great, comedy films in Tamil cinema haven't really been even in the average league in recent memory. Of course there has been quite some good effort in the dark comedy space. But otherwise there hasn't been much to talk about. Had Triples been a feature film, I am assuming that it might have joined the league of those not so funny films. Even now, it isn't exactly rib tickling comedy but given the series format and with each episode clocking merely 20 to 25 minutes, this one remains watchable and moderately enjoyable at times.

Triples is basically about Madhu (Vivek Prasanna), his wife Janaki (Namita Krishnamoorthy) and Cheenu (Rajkumar), trying to get back Ram (Jai) with Meera (Vani Bhojan). There is another girl Mythili (Madhuri) in the equation. Then there is also a money lending don and a politician (who is after her daughter who has eloped) in the mix.Triples tries to manufacture comedy from the madness that ensues when all these characters cross each other's paths.

As already said, the bar for comedy is quite low currently and I wasn't really expecting much from Triples. But it does get off to a rather pleasant start and what works for this web series is the liveliness. There is constant activity and given the frequency of attempted jokes, a few of them are bound to work. This literally means that while the strike rate of the jokes could be poor, there is atleast a chuckle or two in each episode.

It needs some skill to carry off the madness that this genre demands.The performances keep fluctuating between decent and found to be wanting. Vivek Prasanna and Rajkumar keep trying their best, while Jai keeps it subtle (sometimes this comes across as disinterest) as usual. Vani Bhojan is good in a role that requires her to be serious most of the time. Namita Krishnamoorthy sort of gets the meter right, while Madhuri is adequate and fits the part.

Triples might have worked all the more had it got the quirkiness associated with the Baby Chetta character right. This track doesn't really work. So is the track involving A. Venkatesh as the politician with his henchmen.This one keeps using recycled jokes in an unfunny manner.There are also attempts to create jokes out of hot topics like the IPL and politics. But they all fall flat as they come across more like memes translated on screen. And I am not sure if the 'Karuppu Thundu' joke was a dig at any particular section. But if so, I am not sure whether it was in good taste.

While Triples is mostly harmless fun, it should have surely done away with few things. It is baffling to see Meera who plays a HR in an IT concern compare surrogacy with sleeping around.

Triples remains watchable and is a collection of few good jokes, lot of silly ones and a whole lot of misfires. Wish the quirkiness associated in naming the titles of the episodes (one episode is Mad Max Mylapore) was also there in the execution. But that said, this one remains lively for the most part and given the recent history of Tamil comedies this one isn't all that bad. 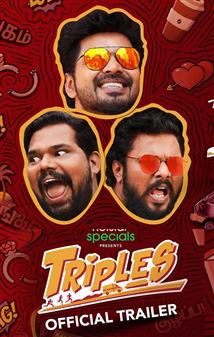