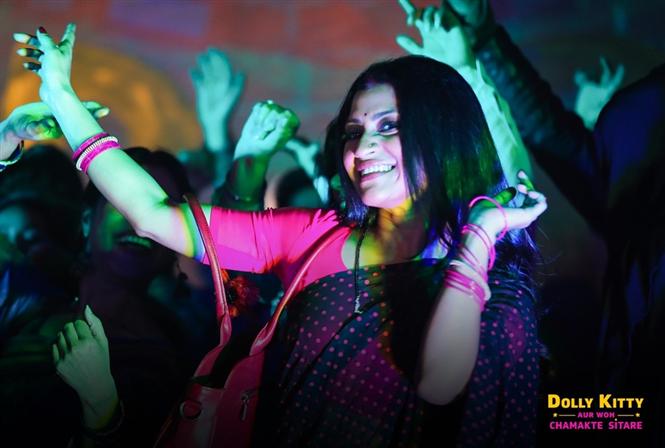 Female desire is a less explored theme in mainstream films.The term desire here isn't restricted to sexuality but as a matter of fact that is where a majority of societal restrictions are likely to be in place. 'Dolly Kitty Aur Woh Chamakte Sitare' explores how two women come to terms with what they desire, and how they try to come out of the shackles, that is preventing them from seeking what they desire.

When we are introduced to Dolly (Konkona Sen), we see her as a rather happy housewife, who is content with her family but is always on the lookout for materialistic pleasures. She seems to be running the show and her husband does seem to be supportive. It is Kajal (Bhumi Pednekar), her cousin, who is facing issues and is struggling to stand on her own feet. Kajal stays with Dolly (and her family) and her basic needs are being met but she wants to be independent and explore the city of Greater Noida on her own. Basically, if we are to define the characters at the start, Dolly looks to be the conservative one and Kajal the one who might not fit into the norms set by society. While Dolly tries to drive sense into Kajal, the opposite is what seems to be happening with Dolly coming to terms with her actual desires.

Both Konkona Sen and Bhumi Pednekar come up with noteworthy performances and are a major reason to keep us invested with the film. But the film as a whole is a mixed bag. There are quite a few terrific scenes (like the one where Dolly meets her mother) but the intensity keeps wavering right through. We can relate to the issues being discussed but the characters and the sequences on screen do no really get us rooting for them. This is because important events seem to happen more like coincidences. Kajal (Kitty for a brief while) falling for Pradeep for instance. She is employed at a place that requires her to speak to customers over phone to provide them temporary romantic relief. So her getting so emotionally involved with someone despite knowing why he might have dialled the number, makes it difficult for us to invest ourselves with her emotions. It definitely is plausible and we understand that she is yearning for love and can easily fall if someone gives her some attention. But the entire episode seems too conveniently narrated.

In the case of Dolly, she is being deprived of her physical needs and her medical condition seems to be the reason or that is what she believes. This is a far more complex track (atleast on paper) and is basically about how Dolly realises why her mother lived her life the way she did. Again, the issue in this track for me is that there never is that one conversation between the couple to try and set things right. The dots can obviously be connected and assuming few things, we can side with Dolly but again important decisions and the way the characters change quickly seem far too convenient. But atleast over here there is a gradual progression in the mutual attraction between Dolly and the young guy Osmaan (Amol Parashar).

The very first scene of the film has both Dolly and Kajal going on a ride in an amusement park. This is a horror themed ride and has gory looking images and mannequins popping out at various points. But the two don't seem too perturbed and are just screaming to enjoy the occassion. This is probably Alankrita Shrivastava (the director) saying that when women know that most restrictions and horrors imposed on them by the society can be taken head on, they won't fear at what is being thrown at them.

Dolly Kitty Aur Woh Chamakte Sitare has a lot to say about a lot of things. The film works in parts, has fine performances and remains an intriguing watch. But not everything that the film wants to say comes across successfully through its characters. You may agree with the politics of the film but whether you are convinced of this through the film is a question mark!