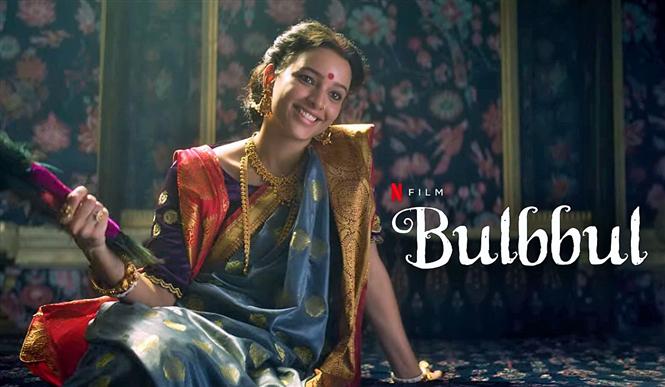 Anushka Sharma’s latest production film Bulbbul, has just hit Netflix and has had a good amount of buzz through its trailer! Dealing with child marriage and how it affects a young girl’s life, this dark, semi-horror revenge movie with a runtime of around 90 minutes is set in 1881 and takes place in an ancestral village in Assam. Does Bulbbul keep its audiences hooked?

The film starts off from the child marriage where we are introduced to three main characters Bulbbul (a 10 year old child), her husband and Satya (her brother in law). A major chunk of the film focuses on how the lives of these three characters get influenced by few other people in their lives. These include Mahendra, Binodini and Dr.Sudip. Many years laters, this ancestral village sees a series of deaths of men that are known to abuse the women of their houses. Are these murders done by some animal? Or is there an actual Demon-woman going ahead with these crimes forms the rest of the story.

On paper. the one line seems extremely interesting and the treatment of the entire picture is something that sets it apart from any usual revenge story. Be it the colours used for the night effect (red tone), the Goddess Kali representation of the strong woman and the general visual and art work, Bulbbul has a lot to offer and instantly attracts fans of cinema. Also, there is no point where it gets preachy and the makers have stuck to their basics by not trying to spoon feed us.

As for the casting, Bulbbul played by the beautiful Tripti Dimri, shoulders the film with her innocence as well as some strong emotions. Rahul Bose as her husband is menacing and Avinash Tiwary as Satya is satisfying though he could have done a slightly more impactful job. Other characters such as Binodini (Paoli Dam) and Dr.Sudip (Parambrata) are well written and well enacted.

Following a non-linear screenplay, the film is pretty well-handled considering the minimal characters and locations in hand. Most of the story happens within a large mansion and in the woods (a forest near the village). The flashback portions are very well portrayed by the kid who plays Bulbbul in her childhood and this sets the mood for a tragedy based, horror film. However, the plot is quite predictable and the revelations could have been a lot better. Also, some of the scenes shot in broad daylight seem to have a ‘serial’ like visual. One might think the production quality and set work could have been more lavish and the screenplay, a tad bit more suspense-filled to spice things up.

Some of the mention worthy scenes include most of the scenes shot during the night within the forest, the pre-climax fire portion, the flashback scenes that begin the proceedings and the most intense part where Satya leaves for London and Bulbbul gets tortured by her abusive husband. The pain in these portions work out well and set it up for the revenge of the Demon-woman.

As for the technicalities, cinematography in the night deserves a special mention. A large part of the film is in darkness and the 'reddish' tone is a treat to the eyes for those looking for a whacky colour tone. In fact, this is the instant attraction for cinema audiences. Edit is functional and the music works in places. A decent show by director Anvita Dutt and her crew.

On the whole, Anushka Sharma’s Bulbbul has a very good intention and conveys how absurd some of the customs (child marriage) were. When a woman is forced to live with an abusive man from her childhood and asked to keep quiet about the torture she undergoes, it is definitely not fine and she deserves to break free! This is the base concept that has been touched upon through this revenge-based, spook show that comes out as a decent watch. Nonetheless, Bulbbul does have some really good elements for those who like the eerie, dark genre films with an atypical treatment.

Bulbbul has a good premise, fine intention and an unusually attractive treatment!