Choked - Has its moments but isn't as rewarding as it ought to have been!

An ordinary man in an extraordinary situation is the crux of many potboilers. Then there are these films where a stroke of fortune changes the life of an underdog overnight. Choked uses these elements but it is little surprise that Anurag Kashyap isn't going to tread any beaten path.

Sarita and Sushant, a young couple with a kid are in a sort of a love hate relationship. You can clearly sense that they are really into each other but the fact that Sarita is the lone breadwinner puts their lives in constant turmoil and Sushant's indifference doesn't help. Their biggest problem - Money! The initial hour gets us accustomed to the routine of this micro family and we keep getting peeks about their past, not through flashbacks but through references and daily chat. While the main plot point happens much later, these initial portions are what work best and the performances do the trick. Saiyami Kher is brilliant and Roshan Mathew is an able foil and the relationship dynamics keeps things extremely interesting though not much actually happens in terms of plot movement.

Things take a turn when Sarita finds a mysterious source of cash inside her house amidst the chaos surrounding demonetization.  While she was already the boss of the family, she sort of gets all the more powerful now. While the monetary woes of the family keeps diminishing, the emotional turmoil keeps piling up and so does the distance between the couple. Things spiral into a climax that has a lot happening but lacks the punch or closure that this film needed. The feel primarily occurs because I was unsure of what the film actually intended to do. I am not talking about what the film wanted to convey but what did it actually want to do to the audience, as in, what was the lingering taste it intended to leave. The plot is exciting, performances are top notch and a certain engagement is there right through. But towards the later portions, the grip loosens. This is primarily because the relationship drama that worked well initially is relegated to the background and the actual core of the film sort of fizzles out because there is no real conflict and whatever conflict is there doesn't get you interested.

You do get the satirical tone of few scenes. Then there is probably this take on how the middle class probably choke when they actually get to live the life they dreamt of. The anxiousness is probably too much to handle and they probably are better off when they remain low key. Maybe I got this inference completely wrong but that apart, the film falls in between a simple drama and a zany take on an interesting premise. The amalgamation doesn't really pay off as anticipated.

A well made film that has its high points and has you invested in anticipation. But as a whole, the pay off is rather limited. 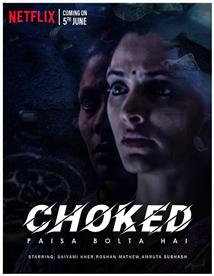