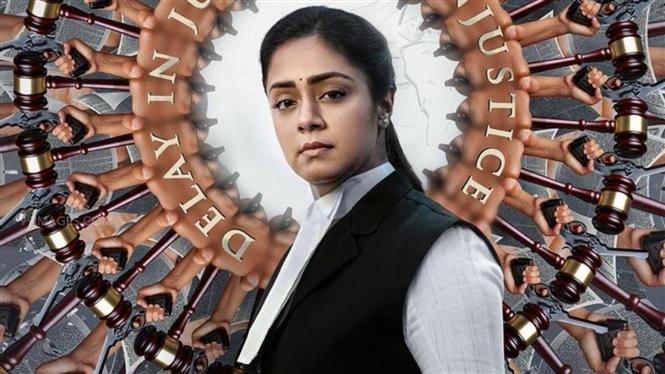 So the lockdown offers another experience. Watching the FDFS of a film at your home and at your will. Is this something that we are going to experience more in the near future? Well, that's a discussion for another day. For now let's get into the Jyothika starrer Ponmagal Vandhal that has made its debut on Amazon Prime earlier in the day.

The message versus the actual movie watching experience debate is one that might never cease to exist. It is the similar feel that you get when you acknowledge a sportsperson for being honest on the field and for keeping the spirit of the game alive. But that cannot be the yardstick to measure his or her actual performance on that given day.

A lawyer in her debut case reopens a long forgotten case about a psycho who went on a killing rampage hunting down young children. You pretty much know right at the start that the case has been fabricated and what you anticipate is a thriller that unravels twists or a court room drama with a neat tug of war between two lawyers (actors to be more precise) or an emotional backstory dealing with something very important. The film doesn't want to leave out anyone disappointed and so packs in all the three. The outcome is that of a buffet where the menu is appetizing but the taste is average at best.

Leaving out Bala's Naachiyar, this is Jyothika's most sober or dark film where she is spearheading the proceedings. She is adequate but it also looks like she is consciously trying to prove her mettle by keeping away from the chirpy characters that were right up her alley. Despite a well known supporting cast, the performances come across as perfunctory for the most part. Given the magnitude of pain that is being shown on screen your emotional response is limited. It is reduced to the rather amateur reaction shots of characters weeping on screen.

There is a twist placed at two important points and they do work but again they don't really contribute much to the thrill factor. The villain being treated almost like a caricature towards the climax dilutes the film to a great extent. The entire premise is built upon a heartless and powerful man who has used his influence to conceal gory crimes and you just can't make a fool out of him out of nowhere. You can probably excuse something like this in a hero worshipping mass masala but for a seemingly serious courtroom drama this is too big a miss to go unscathed.

The film pans out exactly as anticipated and the absence of any real intelligent move by either of the lawyers during the case is a big disappointment.

The film does speak about something very important and also makes pertinent points including our instinctive hate towards migrant labourers. But everything is too simplistic and almost read out like bullet points. But what works is that there is a sense of focus right through and despite the film not really sucking you into it, you sort of buy into the earnestness of the film.

A middling film that remains watchable but falls short of the emotional response it ought to have created.