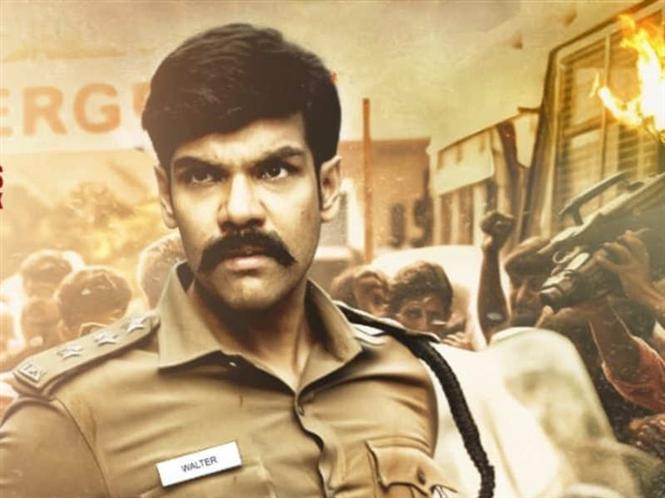 With the changing trend in Tamil cinema and content oriented films being opted for, even by the big stars, there are the occasional semi-commercial attempts which try to cover all possible bases in their runtime of 2 hours. Sibiraj’s cop film titled Walter, is one such attempt that tries to entertain with all the elements and also cover a medical scam issue. Does the film directed by U. Anbarasan engage its audiences?

Sibiraj plays Walter, an honest cop in Kumbakonam and there is a big politician named Eshwaramoorthi who is the most influential man in town. What happens when random babies go missing in this town and how this crime is battled by the police department headed by Sibiraj, forms for the plot of Walter. However, the movie has a subplot starring cinematographer turned actor Natty alongside Samuthirakani, a typical heroine played by Shirin Kanchwala, a few supporting characters played by Riythivika and Munishkanth and a lot more cramped into its duration.

The casting equation of Walter does not seem too apt as Sibiraj struggles to convince us a mass based, stern cop. He does try and emote in most scenes but the command is just not right up there. The heroine Shirin has no role to play and her portion could have been easily done away with. Eshwaramoorthi the poltician and Natty fit their roles fine and the other characters leave no impact. Now this is largely due to the writing of Walter. None of these characters have proper arcs except for Natty’s and that seems to be an issue throughout. As for the screenplay and the sequences, Walter’s first half may seem lengthy for the majority. With the introduction of characters, a couple of love songs, some establishment scenes and so on, it takes all day for the conflict to unfold. In fact, even once we are introduced to the conflict, there may arise a confusion as to which characters to follow for the rest of the movie as the scenes do not hold our attention as much as they may have been required to grip us.

The only mention worthy portion could be Natty’s scenes in the latter half and a twist at the fag end. However, one may not be patient enough to wait that long to get into the proceedings and engage themselves. With cinema becoming extremely competitive, there is a requirement to hold the audience’s attention right from the word go. Hence, a lot of unwanted scenes and songs are not going to do any good for films like Walter.

As for the technicalities, the budget constraints are fairly visible in a lot of scenes. Be it the green mat used for a car sequence or the tack cinematography and ordinary stunt sequences, Walter is just about average in these departments. The music could have been a lot better and intriguing and the songs prove to be a major speed breaker. The rush is barely felt by the audience and this brings down the curiosity of the watchers.

Overall, Sibiraj’s Walter is just another cop based, crime thriller attempt that falls short of expectations set by films of its genre. The semi-commercial formula does not seem like a safe option anymore and content could just be presented without any form of dilution. Sans very few elements, it is safe to say that there is nothing special about Walter. An average attempt at making a cop film that required more finesse in the writing department.

Bottomline: Walter lacks the intensity and grip demanded for a cop based crime thriller!