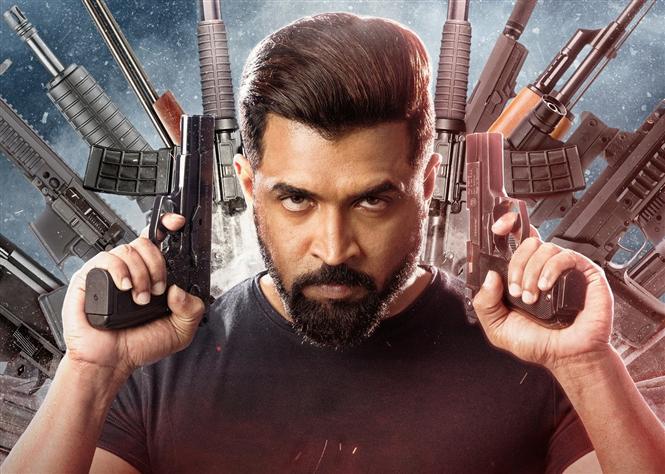 Director Karthick Naren’s comeback film after D-16 is the much awaited Mafia Chapter 1 starring the ravishing Arun Vijay, Priya Bhavani Shankar and Prasanna in important lead roles. Coming across as a stylishly made, cat and mouse based thriller with a good dosage of gunshots, the entire crux of Mafia happens over a period of one week. Has the film lived upto the expectations?

Arun Vijay plays Aryan, a man working in the narcotics section against the drug dealers of the state. Priya Bhavani Shankar (Sathya) and another character named Varun are a part of Aryan’s team as they set out to stop the drug trafficking into the state and prevent usage of dangerous narcotics by youngsters. There is also a police department which works towards vanquishing this group and quite obviously, it is actor Prasanna who plays the villain (DK). Majority of the film deals with the cat and mouse battle between Arun Vijay and Prasanna and there are small subplots here and there to make things interesting as we head to an action packed finish.

The casting equation of Mafia is pretty decent as it has very few characters throughout its runtime of 110 minutes. Arun Vijay sizzles as Aryan and Prasanna is terrific as DK. Priya Bhavani Shankar does a fair job of her character and the other supporting actors have smaller roles to play. The only issue could be that some of the henchmen seemed fairly less intelligent and their characters did not leave much of an impact, as the lead actors were left to do most of the jobs. Prasanna’s assistant (brother) though, was an exception as the role had some sort of an arc.

On paper, Mafia might seem like a very usual story that we have witnessed numerous times in all languages of cinema. However, the factor that helps Mafia stay unique is the making and the treatment. The film starts off in a star hotel and this is followed by various events that have relevance only towards the climax. This non-linear screenplay has helped director Karthick Naren in D-16 and it does add value to Mafia as well.

However, it is the technical team and the shots along with the sound design that make it such a stylishly unique film to watch. Right from the starting credits, pure effort is evident with respect to the technicalities and this sure does overtake the content of the film. Even though some of the fights and gun firing scenes are in slow motion (48 frames per second), the colour tones and the clear cut shot division saves the day and makes it a worthwhile experience. Same is the case with some of the scenes that might seem predictable too. Kudos to the cinematographer Gokul Benoy for his colours, editor Sreejith and the background score by Jakes Bejoy.

It is understandable that a film like Mafia requires a lot of English driven conversations, suave costumes, subtle acting and so on. But though this keeps it true to its genre and the kind of attempt that it is, the fact that it may seem a tad bit alien for a section of the Tamil audiences is undeniable. Also, the family based portions sort of seemed a little too usual and some of the sequences ahead of the last 15 minutes that happen at a godown, might seem a little ‘taken for granted’. The mention worthy sequences include a shootout at the godown, the interval block and of course, the twists in the climax that prove to be the best portion of the film! It definitely has the fizz towards the end and one might wonder why there weren't more such moments in the former half.

On the whole, director Karthick Naren and his team provide for a very watchable, stylish film with some fantastic moments in the last quarter in the form of Mafia Chapter 1. Arun Vijay just keeps getting better from film to film and his aura works wonders in the latter half. He is well supported by a solid Prasanna and an extraordinary technical team that keeps the show on. If for a few more moments that could have been created by team Mafia, we may have had a fantastic must watch experience.

Bottomline: Arun Vijay’s Mafia demonstrates sparks of potential brilliance but falls short due to its forthcomings! Nevertheless, a satisfying watch!