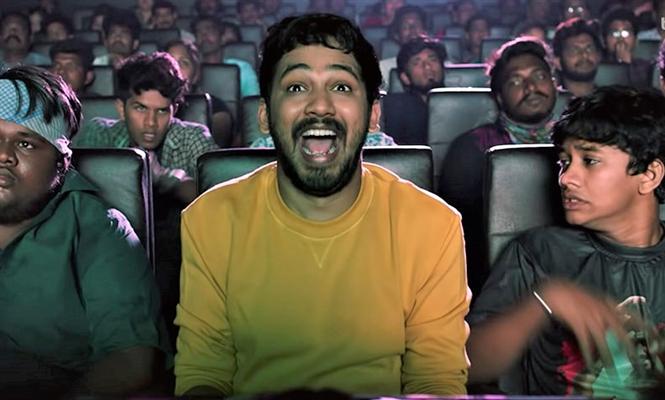 Naan Sirithal Review - A tickle at your funny bone with a touch of emotion emerging as a decent watch!

When a 20 minute engaging short film is made into a full length commercial feature film, there is a requirement for a lot of changes that are to be made in order to suit the duration and mass audience. One such attempt is director Raana’s disorder-based comedy collaboration film, with music director turned actor Hiphop Tamizha Adhi. What happens when a young guy named Gandhi is affected by a disease, wherein he laughs whenever he gets any kind of emotional peak? This is the simple one line of Naan Sirithal. Does it engage audiences?

Adhi plays Gandhi, a normal guy working in IT and Ishwarya Menon is seen playing his love interest Ankitha. The two have a breezy tale of love until an unforeseen event leads to the unexpected disorder that sees Gandhi in all sorts of trouble, as he laughs at a menacing KS Ravikumar (Dilli Babu) at an important juncture. Does he end up escaping from the bunch of goons and get his disorder cured? All these questions are answered in this fairly entertaining ride that has numerous actors in various characters.

Naan Sirithal’s casting is almost on point as director Raana brings out a decent performance from most of his actors. The pick of them being Badava Gopi who plays Adhi’s father and Ravi Mariya seen playing a goon named ‘Sakkaradas’. KS Ravikumar does well as Dilli Babu and the other actors such as Munishkanth, Sha Ra, Eruma Sani Vijay and a few other youtubers have small roles to play. Ishwarya Menon as Ankitha too, does a neat job and Adhi is seen laughing at most instances as his character is sketched that way. However, he saves the mass sequences with tremendous BGM’s and drops for himself and hence proves to be the hero of the film.

Apart from the casting, Naan Sirithal follows a nice colour tone that requires praise too. Though it is a commercial film at the end of the day, the packaging needs to be fresh and the team has tried to work on that. It has worked in a few scenes and this adds up as a positive. Some of Gandhi’s counters work too and the icing on the cake is the commotion based scenes that are woven out in the latter half. The first half seems a little rushed as not much time is wasted on the introduction of any of the characters but one may seem a tad bit of a lag before the interval block where there is a build up to an exciting centre point. Things like these could have been given slightly less importance on contrary to the fast paced introduction scenes that run right into you from the word go.

Technically, Naan Sirithal is adequate for a film of its genre. Though the cinematography by Vanchinathan and editing by Sreejith Sarang are good, the show is stolen by the music and background score by Hiphop Tamizha himself. Be it the foot tapping, well choreographer ‘Break-up’ song or the enjoyable Ajukku Gummukku song, Adhi plays his strokes well with the music department. In fact, he has built up the tension using intense BGM’s in scenes that may otherwise not have been this intriguing.

Some of the mention worthy scenes include the DSP arrear sequence that has Adhi preparing for his arrear, his arrear exam scene, the interval block and of course the ‘Kalakalappu’ style pre-climax and climax scenes that sees all important characters assembled in one location. As much as this is a cliche, it is hard to work humour out in portions of this kind and the director does a decent job of the entire latter half of the film.

On the whole, Hiphop Tamizha and director Raana’s Naan Sirithal is a decent entertainer that has a touch of emotion and good dose of comedy aided by a disorder that keeps various moments alive in the film. If for a slightly more engaging screenplay, Naan Sirithal might have been an extremely enjoyable commercial comedy film. However, it still comes across as a harmless and watchable entertainer.

Bottomline: With quite a few laughs, Naan Sirithal engages in majority scenes!