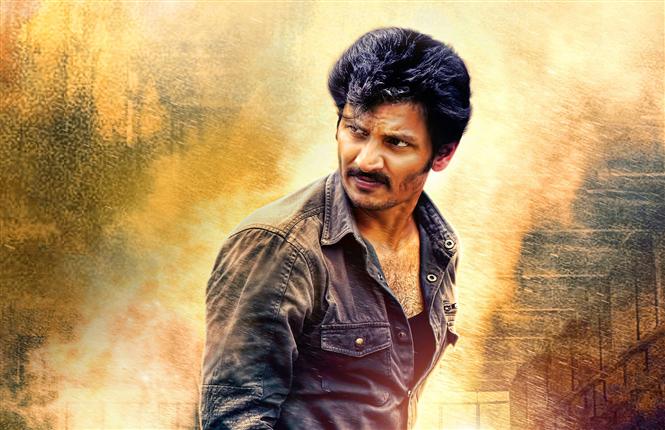 Actor Jiiva’s commercial venture with director Rathina Shiva titled Seeru, is a revenge based drama film that has numerous sub-plots that have been linked to each other. With a large part of the movie set in Mayiladuthurai, Kumbakonam and Chennai, there is a fair mix of family sentiments in this rural film that later takes an urban route. How does Seeru work for the audience?

Seeru has Jiiva playing the hero, a responsible yet angry man who works for a local television channel. This channel is Kumbakonam’s most watched local channel and the team of Jiiva, Sathish and few others work towards bringing to light, the issues faced by the people of their town. What happens when such an issue triggers a very powerful politician and how this has a link to another subplot that later takes course in Chennai forms the rest of the storyline.

Jiiva is quite impressive as the hero and he is joined by debut actor Riya Suman as the heroine who is seen in a template ‘Tamil cinema heroine’ sort of role. The actor played by Jiiva’s sister has done a very neat job and the brother - sister sentiment scenes have worked well. Actor Satish’s one-liners barely work in a couple of places and the film itself has Jiiva making fun of the fact that the humour is bizarre and does not strike the chord at all. Actor Navdeep is seen in a negative role in the latter half and his characterisation could have been better. Varun plays Vyasarpadi Malli, an angry goon who reforms at the most unbelievable point in the film. With a bunch of actors in the kitty, the casting seems alright at some points.

The other subplot that deals with a young state topper girl from a village, takes course only in the last 30 minutes and when we are suddenly introduced to another such plot at this point, one might think why this part of the story never took the driver seat till then. This is based on a state topper girl who challenges to take on all the criminals in Tamil Nadu, that includes the menacing criminal lawyer Navdeep and his numerous cases. She aspires to become a lawyer and already has details about most of the crimes in the state as she vouches to put everyone responsible for rape, murder, etc behind bars.

With a mix of songs, action, comedy and a plot that involves a young girl, the makers have gone in for all these within their runtime of 2 hours. The idea, though not a bad one, has not really paid off at all points. The inconsistency is visible and the audiences moods are constantly shifted between these commercial requirements and not in a very natural manner. For instance, the film would have a serious dialogue about a reformery and why roads are named after them and immediately, we are given a comedy scene in a temple. This sort of a shift may not be to the liking of even many of the mass masala film audiences and this seems like an issue throughout.

Technically, Seeru is minimalistic and fairly so. We cannot really expect too much out of a commercial entertainer and that is how the cinematography and edit has panned out. D.Imman’s ‘Vaa Vasuki’ number is catchy but his background score could have been more refreshing. Dialogues definitely do add value to the otherwise plain film and the rhyme scheme even in serious sequences work here and there. Jiiva as a performer has done an excellent job in a hospital scene but towards the climax one may think, the collective efforts of all the actors and technicians required for a stronger screenplay and few fresher scenes with more importance to the state topper girl’s plotline.

On the whole, Jiiva and Rathina Shiva’s Seeru is a passable commercial entertainer that has a good intention of trying to give power to women and tries hard to convey the fact that men and women are equal on all grounds. However, it does so by making the audiences sit through a hero introduction, 4 songs, a few fights, attempts at comedy and some preachy dialogues. If for a slightly more innovative packaging, Seeru may have evolved into an interesting revenge-based, commercial family drama!

Bottomline: Seeru is just about watchable for its last episode and some well enacted sequences by Jiiva and the state topper girl!