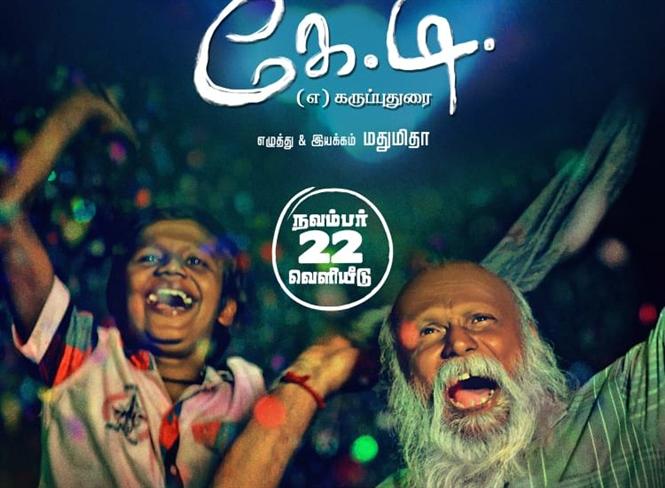 Thalaikoothal or the age old practice of senicide i.e. killing of the elderly by their own family members(referred to commonly as involuntary euthanasia) has been practiced in parts of Southern Tamil Nadu for a long time now. But it probably first received mass attention on screen in the form of the Tamil film Marudhu (2016) which depicted the gory act in a spine chilling manner. While I was both horrified and intrigued about the practice, it didn’t surprise me as such  when I heard of more than one filmmaker’s attempt to make a film with this ghastly practice as its core theme. Madhumita Sundararaman’s KD aka Karuppu Durai is the first of these that I was aware of, but not the first that I got to watch among the lot though. Now that the film is finally releasing tomorrow (22 nd November) after a good film festival run, it is but natural for me to reflect upon this small film with a big heart.

The plot as such is pretty simple, Karuppu Durai (Mu Ramaswamy) is an elderly man who runs away from home to his extended family's dismay and for a good reason. With no clear and precise plans of what to do next, he comes across some interesting people, chiefly Kutty (Naga Vishal), a street smart orphan who lives and works in a temple over there. After pulling on each other’s nerves for a while, soon KD and Kutty find themselves forging a strong emotional bond.

KD is a film that tells us that one can keep things simple and minimalistic and yet manage to achieve an appealing earnestness in terms of the output. There is not a single flashy moment in the film that one comes across, the writing and the execution makes sure that what we witness on screen is perhaps the actual journey of KD and Kutty, appearing effective and true to life. There are a lot of scenes that stay with you well after you’ve finished watching the film. Take for example the whole thiruvizha experience whereby Kutty ensures that KD manages to fulfill certain elements from his bucket list. The biriyani shop portions are funny but simple, the emotional scenes in the second half are heart tugging but definitely without going overboard. Even the music (Karthikeya Murthy) seems to blend in with the tale so intrinsically that it never distracts you at any point.

It also helps that the characters appear very believable, the choice of actors (or non-actors) making the on screen proceedings so relatable. Except for Yog Japee (who plays Hitler, the private detective) and Badava Gopi (the temple priest), the rest of the cast is virtually unknown, giving the film a fresh appeal. Also one can easily notice that while the primary focus of the film is on KD and Kutty, enough care has been devoted by Madhumita to make her supporting characters interesting, be it the temple priest, the koothu artist or the biriyani shop owner. On the other hand, unfortunately KD’s family members appear predictably evil (except for one of his daughters), with no scope for anything even grey about them. Also there is but a distinct predictability that one can experience in terms of some of the proceedings at least. But thankfully these aren’t issues which hamper the impact of the film, which is thankfully very positive. At a run time of just about 2 hours, the film certainly does not appear stretched by any means, editor Vijay Venkataramanan taking care of it effectively.

The film couldn’t have emerged in this admirable fashion without the presence of Mu Ramaswamy and Naga Vishal. Be it in the scenes where he’s devouring biriyani with great gusto or when he’s clearly feeling helpless, Mu Ramaswamy virtually gives KD a lot of depth and grace. Naga Vishal is an absolute delight, clearly in his element portraying the worldly wise kid. He does it so naturally that we are left absolutely charmed by his performance. This is easily Madhumita’s finest work so far, a subject like 'thalaikoothal' could have easily led to a grim and intense tale, but it is to Madhumita’s credit that she’s gone in a different direction, giving the film a positive vibe and making it a celebration of life. 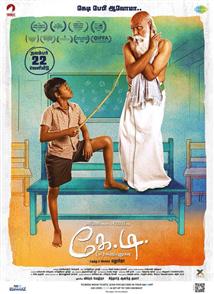