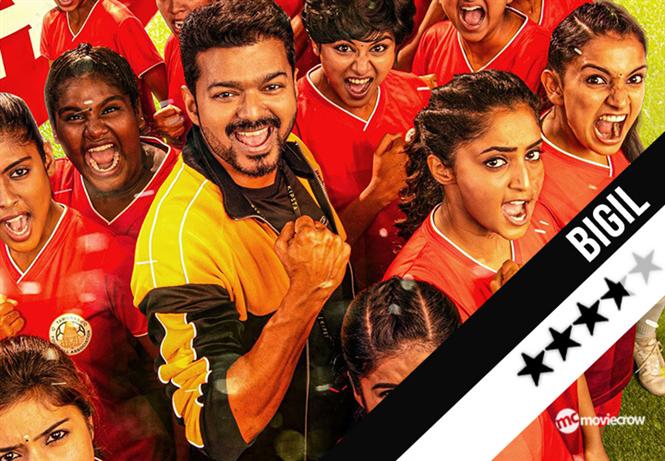 Bigil is Vijay’s Career Best, Yet

Will the second most expensive movie in Tamil deliver on the promise? Will Vijay and Atlee deliver a hat -trick? Can Bigil sustain audience's interest with a running time of 3 hours? All the doubts have been shattered to pieces. Atlee delivers a mass and class package laced with message.

Vijay has delivered his career-best performance. Vijay continues to mature as an actor as displayed in Rayappan’s role as an aging don. Vijay as Rayappan looks rugged with interesting voice modulation and slight stammer. Vijay as Michael is quite the opposite. He looks young, dashing, energetic and charismatic. During the second half, Vijay takes the back-seat to shine the spotlight on all the soccer girls. During the process, Vijay elevates himself higher without even resorting to any pompous dialogues or gravity-defying stunts. It may seem like Vijay sleepwalks casually through his roles sometimes. In Bigil, Vijay has taken painstaking efforts in all departments of acting in addition to his signature dance and stunt sequences.

Despite all the criticisms about lack of originality in story, Atlee proves yet again that his screenplay and intelligent scene constructions and sharp dialogues can keep the audience glued. With Bigil, Atlee has proved beyond any reasonable doubt that he can stage a grand movie on a big scale similar to his mentor. It is not just grandness in terms of visuals, sets or graphics, Atlee has shown the grandness in terms of commercial packaging of content with strong emotional connect. Atlee’s screenplay keeps you engaged despite the lengthy running time. Atlee should be applauded for taking sufficient time to pay tribute to womanhood without rushing through the scenes. Twitter explodes when focusing on negativity to raise awareness. In Bigil, Atlee has adopted positivity in getting the same message across when it comes to handling issues facing women and still deliver with more impact. Kudos to director and production team

Nayantara plays the mandatory hero’s love interest. She plays her part well and provides the necessary relief in the first half and helps convince a few characters in the second half. Bigil has a huge line-up of well-known actors with short screen time with important roles – Jackie Shroff, Kathir, Indhuja, Daniel Balaji, Yogi Babu, Vivek, Anandraj, Priyadarshini, Rohini and the list goes on. Jackie Shroff with voice support from Nizhalgal Ravi is adequate. Yet again, Jackie doesn’t mind shedding his clothes down to a bare minimum. Many actors with fraction of his popularity would refuse to act in such a scene, especially when getting beaten up by the hero. Jackie’s commitment and guts should be appreciated. All the football girls are fantastic and play their part extremely well. The one who stands out the most is 96 fame Gayathri with her teary-eyed looks. Atlee’s writing ensures everyone gets their due recognition even in such a crowded cast.

AR Rahman songs couldn’t recreate the magic of Mersal. But, the maestro makes up big through his re-recording. AR Rahman is the back-bone of the movie and makes sure the emotions work with the magic of his background score. Camerawork by GK Vishnu is exceptional and the lighting techniques used in verithanam song is handled creatively. The warm color tone is consistent throughout and on such a big canvas. The sharp close-up shots bring the best out of all actors. It is understandable that the computer graphics appear to be done under relatively tight budget. All the football grounds and background look exactly the same for all matches. Due to the strong contrast and DI, the audience start ignoring numerous CG issues. However, the CG showing Vijay and other actors kicking the ball is done well. The make-up team has done a good job for Rayappan and for one of the players face with disfigured face. Atlee adopts the successful ultra-high speed slow motion stunt sequences again. The game choreographer of 'Pele' fame has showcased the full range of fancy kicks and some of them will become the signature moves associated with Bigil in future.

Bigil is Tamil’s answer to Chak De and Dangal...well, almost. Bigil falls short due to the compromises done due to budget constraints associated with the computer graphics, a few commercial compromises and forced fight sequences, love sequences, and some intentional/unintentional misunderstanding of Soccer. For example, it is a goal when the ball crosses the line and not when it hits the net. The background score waits everytime till the ball strikes the net. Also, the misconception that the heaviest person can kick the ball longest. In all other classic sports movies, the lead characters go through years of training and if needed, cut their mane. In Bigil, we have a huge distracting hair-wig placed on Indhuja's head. A few of these examples show that we are still not ready to give 100% to make a movie of international standards.

Bigil will definitely launch Vijay in to his next trajectory. Vijay's overall performance in Bigil surpasses that of Mersal, Kaththi, and Thuppaki. The box office will also prove to be the best among his successful movies. Bigil will be a perfect Diwali Celebration in theatres for entire family.