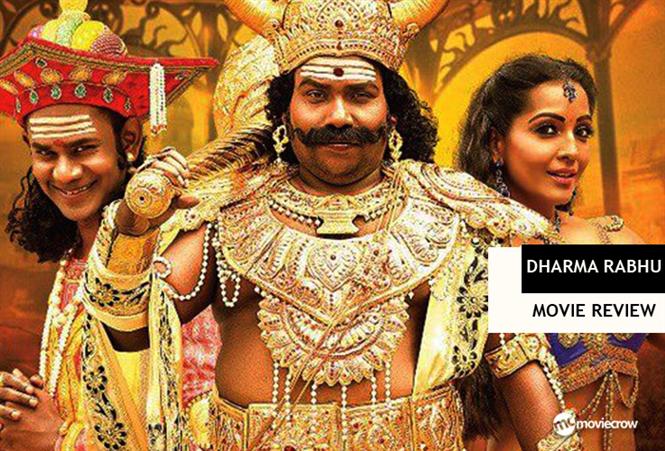 Comedy actor Yogi Babu’s full fledged lead role comes in the form of playing Yaman in the fantasy based satirical comedy film Dharmaprabhu, directed by Muthukumaran. With a lot of set work, attempted humour, a huge star cast comprising of numerous comedians and a dig at the state of current affairs and politics, has Dharmaprabhu genuinely entertained its audiences?

Yogi Babu who is usually seen as the friend of the hero has taken up Dharmaprabhu as his first solo lead film and has tried to give it all. Yogi Babu as Yaman is quite exciting at the start because of his body mannerisms and dialogue delivery. Radha Ravi who plays his father decided to retire from the post of being Yamadharma Raja and the care free Yogi Babu has to now take over the kingdom. Ramesh Thilak plays Chitraguptan, a trusted right hand of Yaman. What happens when the two of them decide to save a child against the laws laid out by the gods forms the storyline of this picture.

Even though the one line seems sufficiently exciting to make a good looking humour driven fantasy film, the makers have tried very hard and that seems to be the biggest problem for Dharmaprabhu. Barring performances by Yogi Babu and Ramesh, there are too many character who just walk in and out of the film not allowing for an arc to be created for any of the other characters. Janani Iyer is seen in a cameo appearance too and just like her, there are many others who have short roles to play that may or may not matter for the crux of the film.

The ideas of bringing in troubles faced by farmers in agriculture, a scene on a rape and how the criminals must be punished, many sequences taking light digs at Tamil Nadu’s political scenario and even a touch up on India’s freedom fighters like Gandhiji, Subash Chandra Bose are all stuffed into this film which required just focus on the one line. Even though there are moments to laugh about here and there, there is nothing concrete to hold the plot together and this is where the movie falls flat.

Credits must be given to the costume designer and art director to have brought out a fantasy world led by Yaman and his ministers. The ideas are definitely there but the execution should have been a lot better. There is even Motta Rajendran playing lord Shiva but he seems barely effective to induce humour. Bose Venkat playing a politician is a treat to watch and only his scenes take the story forward. Otherwise, the dots seem so disconnected and we get the feeling of watching different episodes put together in a film.

Technically too, Yogi Babu’s Dharmaprabhu is not too impressive as the graphics work could have been a lot better when you depict hell, heaven and other such fantasy elements. However the set work can be appreciated. Cinematography by Mahesh and music by Justin are just about average and do not add great value to the final product. One might also feel the film required a better trim as the second half just keeps going on with barely any points that take the plot forward to an interesting climax. Screenplay sure is a big minus for this film.

On the whole, Dharmaprabhu does have a few good episodes and few funny one-liners and enjoyable scenes. But the big picture is that of a half baked one due to the lack of an impactful screenplay and scene by scene narrative. If the makers had decided to concentrate more on the values that might be an additive to the plotline and story and played with humour around the plot, it could have been a very engaging and different fantasy film. However, the intention of touching upon rape, issues in agirculture, politics, caste based idaily problems and our beloved freedom fighters are all good. But this alone cannot save an entire film running close to 2.5 hours and that is exactly the case with Yogi Babu’s Dharmaprabhu.

Yogi Babu tries hard to entertain with this fantasy adventure but is let down by a poor execution that demands for a more gripping ride! 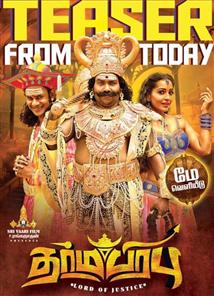