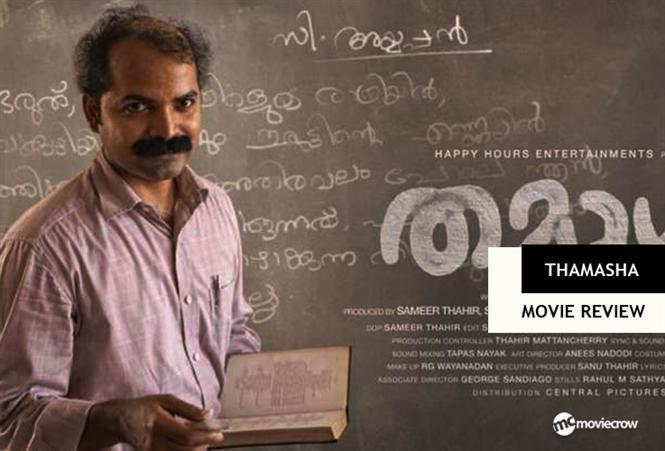 Ashraf Hamza's 'Thamasha' is your typical new-gen Malayalam film where you can place your bets for a heart-warming tale of sublime emotions and characters that are beautifully humane. The film is about Professor Sreenivaasan who is looked out as an unlikely groom mainly because of his baldness. He comes across three women in his life.. each of them as a potential alliance for a marriage. What he experiences through this cooks up into a bittersweet story of love and life.

Vinay Forrt plays the lead role with an utmost ease and perfection. He brings out a complex within him with a classic touch of comedy and realism to it. It is a delight to look him blush and romance. Look at the stretch where he runs to a bus when his wig gets snatched by a kid. His wobbling fear and shame doesn't get exbihited as melodrama but as a pinch of what it is to be like him. Also when he has to come in terms with the reality of life and accept himself for who he is.. the anger and desperation is minutely sketched out.

The mundane characters around him in the film are even more lively enough to keep you invested throughout. A thoroughly professional teacher.. An over-enthusiastic assistant.. A control freak yet friendly principal.. A worrying mother who just wants his marriage to happen at any cost.. A hip younger brother.. A very understanding father.. They all etch a shade to who he is! Through them, we discover more about the man and his inner self.

The women in the film are beautifully written without any safe for presumptions. We don't judge them for their judgements or acts. Be it Dhivya Prabha who plays the teacher or Grace Antony who comes accidentally into his life (the interval twist involving her is a cracker).. they perform the selfcentered-ness of their characters with a dignity to it. Navas who plays his sidekick, Raheem, is hilarious. The scene where he curates him to write a love letter is a killer. Arun Kurian, plays his brother and the constant inward jealousy in Sreenivasan about his goodlooking brother is subtly portrayed.

But the real striker of the film is.. Chinnu Chandhni who plays Chinnu, an overweight woman who just doesn't care about what others think. She comes off as an alliance and turns into a companion. The second half of the film revolves around how incidents get into a mess when they both get trolled for how they look. This entire set of events is in a way, a macroscopic metaphor for the whole concept of bodyshaming. Here is a story of a man who is bald and struggling to come terms with his looks and he learns to be himself through a woman who is happy about who she is! This sense of a lesson that he learns through the journey calls in the audience as well to be a part of it.

Sameer Thahir's cinematography breathes a gentleness all throughout. The score and soundtrack by Shabnaz Aman and Rex Vijayan elates the film's tenderness. The 'Paadi Njan' cues that keeps coming as his theme sort of sets a jubilant vibe to the film. Shafique Mohammed Ali paces the film in sync with the mood of the story that it says. Though, we don't quite expect the cinematic sequences towards the end of the film.. like, where students who kept mocking him till then showing solidarity in warning his trollers or the rushed up end.. the film, for sure, will spell a big, breeze of a smile and content as you leave the screens!

Bottomline: Ashraf Hamza's 'Thamasha' is a tender-sweet tale of self-love and sublime emotions where the actor in Vinay Forrt is in a supreme form! 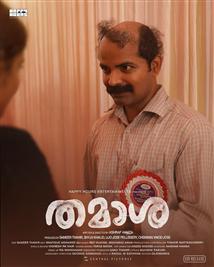