Simmba Review -: Aankh Maaroing all the way to the Bank 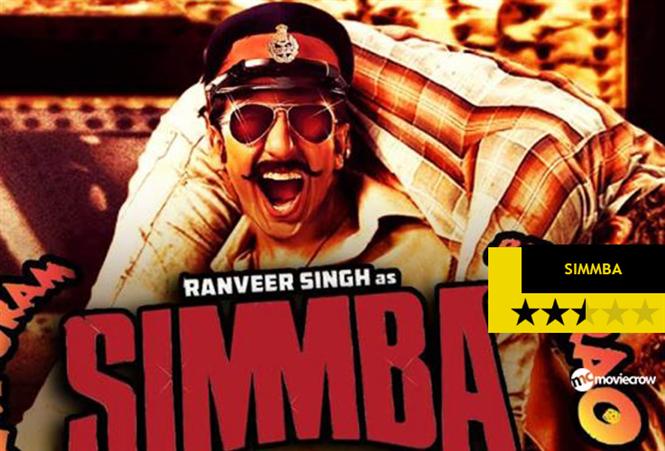 Simmba Review: Aankh Maaroing all the way to the Bank

Simmba at the very outset looked like a safe bet from Rohit Shetty and no I am not saying this just because it’s become a bonafide super hit or because I loved the original film, Temper by Puri Jagannadh (I did not). After all this was a story of a rogue cop who turns into an ideal cop thanks to a turn of circumstances. Also Rohit Shetty has shown that he is adept at giving his own spin to an existing screenplay while working on a remake/adaptation. A good example is that of his own “Bol Bachchan” where he retained just the core premise of Hrishikesh Mukherjee’s classic comedy Golmaal and made that into something that had his signature stamp all over it. But closer to the release I was wondering if Rohit seemed to be a bit insecure, why else was he bringing Singham aka Ajay Devgn on board Simmba as well? But the doubt definitely vanished while watching the movie. So there’s the local don Durva Yashwant Ranade (Sonu Sood) who’s mighty upset with the new cop in charge of Miramar Police Station (where else but Goa?), Sangram Bhalerao aka Simmba (Ranveer Singh) for having crossed his path. While Durva is fuming and venting out his anger in front of his henchmen at his house, in comes Simmba who starts off by giving away presents to Durva and all his family members, quickly taking everyone by surprise and getting them to warm up to him. Even a miffed Durva finds himself unable to resist the humorous manner with which Simmba goes about making his agenda clear and apologizing for his previous actions. This is just a sample moment from the film whereby we see the way Rohit Shetty has reinterpreted Temper & how Ranveer Singh has gone on to portray the lead character in a manner that does not remind you at all of NTR Jr.’s performance in the original and yet proving to be entertaining all the way.

In case you would still care to know what the plot is all about then let me share the same in a nutshell. Simmba is an orphan who decides early on that the best way to strike it rich is by becoming a corrupt cop and he manages to fulfil his ambition. He is posted to Miramar where he soon goes on to get friendly with the local don Durva Ranade, turning a blind eye to all the nefarious activities carried out by Durva and his gang. But circumstances force Simmba to turn a new leaf; even if that means that he has to defy Durva and his men. This is the only way for him to redeem himself after failing to protect someone who looked up to Simmba as her brother. How does Simmba go about challenging Durva and whether the corrupt cop does end up becoming the do-gooder is what we see as the film progresses. No prizes for guessing what happens eventually.

Rohit Shetty and his writers, Yunus Sajawal and Sajid-Farhad have focused on two major aspects, giving Simmba a lot of scope for humour, also changing the second half to incorporate a strong social message that is audience friendly in a way. And in Ranveer Singh they managed to get a good ally, he keeps the first half very engrossing, thanks to the comic way by which he goes about performing the character of the corrupt cop. However the whole thing becomes a little of a drag after a while especially after the novelty is worn out. Also there’s a bit of heaviness that creeps in post interval, making the proceedings exhausting after a while. And the run time of nearly 160 minutes acts as a deterrent in a way. The music has worked for the film, with recreated songs like “Aankh Maare” and “Tere Bin” (both reworked by Tanishk Bagchi) becoming popular.

Sarah Ali Khan who made her mark with Kedarnath is wasted in this movie post interval, while Sonu Sood plays the regular villain here. Ashutosh Rana, Siddhartha Jadhav and Vaidehi Parshurami get noticed, but that’s about it. Ultimately Simmba is a Ranveer Singh vehicle, it is clear that he has had a blast playing the titular role. By integrating Simmba into the Singham franchise and by giving us a sneak peek of his next film, Sooryanvanshi (with Akshay Kumar), Rohit Shetty seems to have met his objective with Simmba. As an entertainer it works partly, nothing more than that though.

Simmba sees Rohit Shetty score it big at the box office with another cop saga, this time with Ranveer Singh playing the lead. It has a few things going for it, making it an average fare at best. 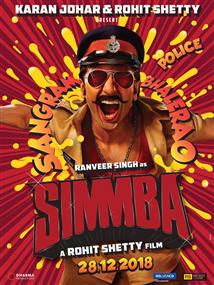