Kammara Sambhavam Review: An Ambitious Tale with a lot of Spunk 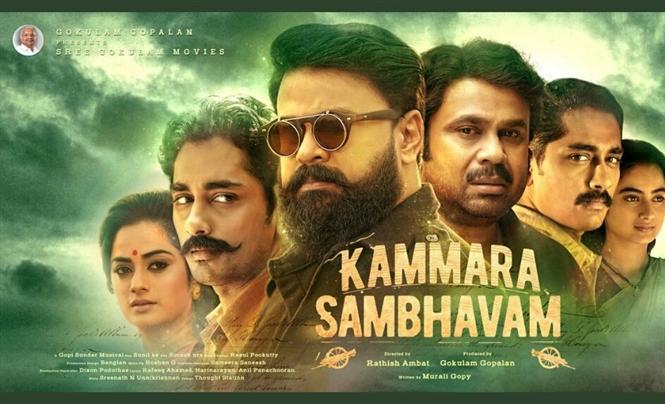 Kammara Sambhavam Review: An Ambitious Tale with a lot of Spunk

Rathish Ambat serves us a clue of what to expect from his debut film Kammara Sambhavam, right at the very start. “History is a set of lies agreed upon-Napoleon Bonaparte” is what we get to read as the film begins, only to be reminded of the same as the end credits roll on as well. You realize the significance of this statement of course only in the course of watching the film, perhaps a little more than halfway through it. After all these days we keep hearing of how history is always something that we get to know/hear/read from the victor’s point of view and that there could be one or more different versions of the same tale from the past as well. Who knows what exactly is the truth regarding a historical figure or moment? Are we always sure of what we believe in to be true? Rathish Ambat tries to bring our attention to this aspect in his ambitious tale in an interesting fashion.

Kammara Sambhavam begins with a few members of the Indian Liberation League (ILP) trying to revive the political fortunes of the party, along with clear business interests as well. They (Vijayaraghavan, Vinay Forrt, Baiju, Sudheer Karamana and Indrans) hit upon the idea of making a feature film on Kammaran (Dileep), an erstwhile leader of their party who according to them is an unsung hero and having the potential of now being their saviour of sorts. Accordingly Pulikesi (Bobby Simha) a hit Tamil film director is roped in to helm the project & Kammaran himself who is now an ailing old man goes on to narrate his life story  which is full of history and intrigue. The ILP was apparently started on Netaji Subhash Chandra Bose’s instructions initially as a rebel military force of sorts in the 1940’s going on later to become a political party.

The centre of action is in a place that is close to the Tamil Nadu-Kerala border where Kammaran Nambiar is seen to be a physician who lives with his sister (Divya Prabha) and enjoys the good will of the people around him. Kelu Nambiar (Murali Gopy) is the local landlord, a tyrant who terrorises the migrant Tamil workers and someone whom Kammaran secretly hates. Unlike our expectations Kammaran is shown to be a shrewd, scheming man with a clear agenda of his own. He seems to only care for 2 people, his own sister and the girl whom he had always loved, Bhanumathi (Namitha Pramod). Pulikesi doesn’t benefit from hearing the complete story of Kammaran but he keeps his promise to the producers and makes the film which showcases Kammaran, the ILP and almost all the characters from the story in a totally different fashion. Kammaran who was never a hero in real life is now projected as one in the film and the overwhelming response to him and the film takes the whole state by surprise.

It becomes very clear that the film’s ambitious prospect is not just because of the scale and magnitude. Murali Gopy’s writing is laudable for the way in which the proceedings flip in terms of dimension and perspective, post the interval. It’s also clear that Murali Gopy and Rathish Ambat have been able to wonderfully work in tandem, the execution on screen being the indicator. As such the first half of the film takes on a near realistic feel, the narrative adopts a traditional style of sorts and we witness the proceedings which involves many interesting characters. Post the interval through the guise of a film we see the tale unfold in a totally different perspective, the larger than life nature appears to be a bit jarring initially, be it in the way Kammaran’s character is shown in total contrast, the loud BGM or the slow motion shots. But once you understand the objective of the filmmaker it becomes easier to understand and relate to the happenings. Suspension of disbelief is the vital factor which helps one sail through the second half; you’ll need to watch the movie to understand this point.

Considering that the first half manages to be very interesting and impactful one would have expected the director to follow suit in the same direction and make his stand clear. But that clearly doesn’t seem to be what Rathish Ambat and Murali Gopy wanted to attempt; the result is mostly satisfying. Gopi Sundar’s music (both songs and BGM) and the action choreography also work in favour of the film. But the film isn’t without its concern areas; to start with it’s a tad too lengthy for comfort (183 minutes). The film can definitely benefit from a tighter edit by veteran editor Suresh Urs. Taking a dig at various political and social scenarios and happenings in the film is fine; it actually makes the proceedings more interesting. But why did Dileep have to end up making a nasty remark of sorts in reference to his own ongoing legal battle? It doesn’t really go down in good taste.

The film has a large ensemble cast, most of the choices working out pretty well. Vijayaraghavan, Vinay Forrt, Baiju and Sudheer Karamana do not have much to do while Indrans and Siddique manage to get noticed despite a relatively short screen time. Murali Gopy as Kelu Nambiar is shown in two different dimensions; however it is as the cruel tyrant that he leaves an impact. Divya Prabha as Kammaran’s sister is effective, Shweta Menon does justice to her evil avatar and Kenny Basumatary is fantastic as Netaji. Namitha Pramod is charming and does well, playing Bhanumathi with conviction. Siddharth makes a confident debut in Malayalam, portraying Othenan Nambiar in two different shades in style. But while he speaks Hindi so effortlessly, it is a little unnerving to hear him speak his Malayalam dialogues. Dileep is in fabulous form over here, if his swashbuckling avatar a la Che Guevera of sorts post interval might please his fans more, it is in the first half where he takes on an unheroic shade and truly excels.

Kammara Sambhavam is a film which thankfully isn’t something that lays emphasis on style over substance. Needless of how the switch of narrative style works for you, this is a film that is worth an outing at the cinemas.

Rathish Ambat manages to make an impressive debut and is aided very well in the process by his writer-Murali Gopy and his leading man, Dileep. It is an ambitious experiment of sorts, but an attempt that is mostly impactful. 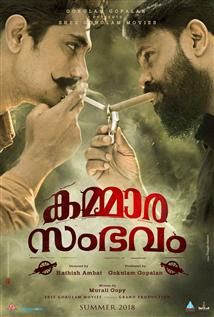