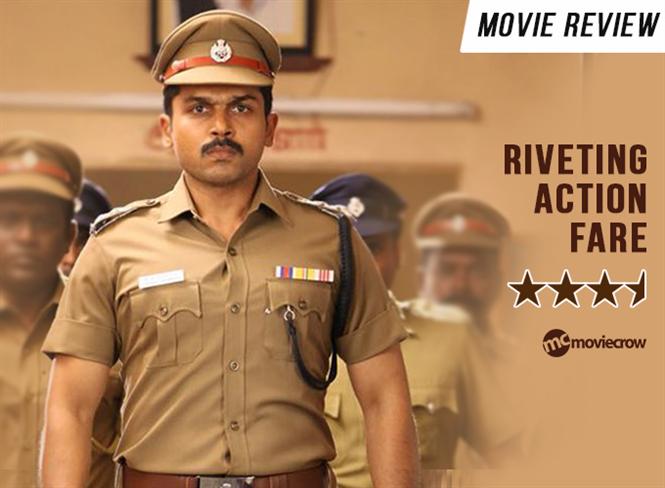 Police stories are nothing new to Tamil cinema. We are used to a variety of them. The mass masalas with our quintessential police hero playing to the gallery is a rather routine affair. Then there are their more realistic counterparts. We also have these highly stylised and romanticized cops of Gautham Menon. Vinoth's Theeran Adhigaaram Ondru in many ways is vastly different from what we are usually accustomed to. It is relatively realisitic, adequately entertaining and most importantly an extremely engaging action fare.

It takes a solid 15 to 20 minutes before we get to the main plot. This initial portion is completely dedicated to the romance between Karthi and Rakul Preeth Singh. It strictly follows the cute girl template that we are used to. But to Vinoth's credit he keeps the track rather lively despite being full of clichés. Rakul does a good job here. She puts up an enjoyable performance that could have easily been hijacked into the irritating 'Loosu Ponnu' category. The film then shifts to top gear once the core plot gets underway and from thereon the proceedings are airtight for the most part..

The film's biggest strength is that we are all the while aware that what is being shown on screen is based on real events. This is not merely because it has been stated by the makers but because it feels so on screen. The actors playing the various parts, the landscapes that the film traverses and the action choreography – everything is authentic while also ensuring that it is being treated as a commercial action vehichle. Vinoth has packed the film in such a way that it runs like one big climax. The tension is real because the villains are ruthless and the danger is always looming large. Cinematic liberties are rather kept minimal. The post interval action sequence with Karthi taking on a number of people is one instance of hero glorification that looked forced but even there what happens next sort of evens things out. So Vinoth knows that he has to play to the gallery but what is heartening is that he retains certain sensibilities. Hence we have a dance number that might be meant to titillate but the lyrics are not in Tamil but the language of the place where it happens. Theeran Adhigaaram Ondru gave me the feel that this might be how a Mysskin film might play out if he decided to cater to the masses.

The action scenes are pulsating. The technical team has done a superb job. The scale is huge and this is not to just give the big screen experience. Most of the time we are transported literally to where the events are happening, so much so that we feel thirsty towards the climax when the scenes of action are dry barren lands. Ghibran's score plays a huge role in adding to the excitement.

Most of the times we get served masala fare in the name of action movies. Theeran Adhigaaram Ondru is the closest we have got to in experiencing a hardcore action film in recent times. Both Karthi and Vinoth are in fine form here. 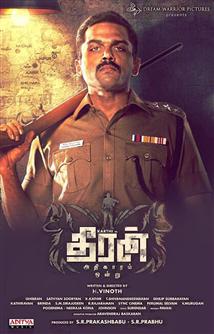