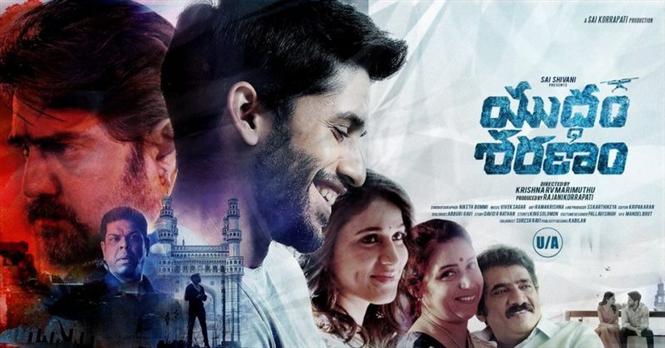 Naga Chaitanya joins hands with debutant director Krishna for a film that trots between emotional family bonding and revenge. The plot of Yuddham Sharanam is age old; director Krishna basks high on emotional elements to drive home the revenge drama and in the process weaves a few twists here and there to keep the movie engaging. Naga Chaitanya shoulders the film with different shades; a fun loving son, a naughty yet happy-go-lucky lover boy and then a ruthless youngster, who is ready to go draw his sword when he finds his family is in distress.

Yuddham Sharanam follows a non-linear narration. It makes sense as the film’s revenge quotient consumes all of the second half. To show the contrast of emotions of the hero’s life before revenge, action and all that, the non-linear screenplay does is required. The first half pans out rather well with high family sentiments; a few light hearted inspiring dialogues from Nag’s father sets up the ambience of a straight forward yet fun loving middle class family. Rao Ramesh and Revathi are the pillars of the first half with their lively screen presence as parent. Lavanya as the medical intern who falls in love with Nag has been treated on a decent note. Krishna’s strength easily lies in the first half when establishing strong reasoning for the revenge drama that unfolds later. He takes time to highlight every single character of the family and the emotions are kept on check with cream coated dialogues, kudos to that.

The problem however starts in the second half which goes down rather too weakly. The trouble starts when the family gets involved with the criminals. The screenplay instead of racing ahead falters big time without proper focus. A scene where the hero uses his work to help and carry blood to a pregnant woman caught in traffic pile up, deserves special mention. With good visuals and decent BGM, scenes like these save Yuddham Sharanam from its mediocre second half.

With a good actor like Srikanth donning the villain role, his character looks rather scripted and bleakly without proper justification. The plot simply uses his menacing looks and those usual stereotyped villain dialogues instead of utilizing his acting prowess. Naga Chaitanya is at his best in the first half. However, his aggression is not highlighted well enough which is no fault of the actor. These are valuable lessons for director Krishna who even though might not have impressed completely, is a good find for Telugu industry indeed. Some of the stunt sequences are done remarkably well, thanks to some sharp cinematography and good BGM.

To sum up, Yuddham Sharanam has its moments, then loses sheen as it progresses towards the climax, making it a half-baked thriller. 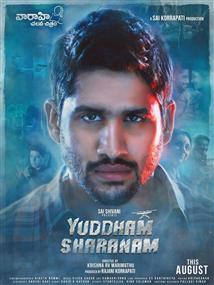