Thondimuthalum Driksakshiyum is an upcoming Malayalam film written by Sajeev Pazhoor and directed by Dileesh Pothan. The movie stars Fahadh Faasil playing the main lead role. The makers have confirmed that the movie is all set to hit the screens on June 28th. Bijibal scores music for the film. The movie is produced under Urvasi Theatres banner. 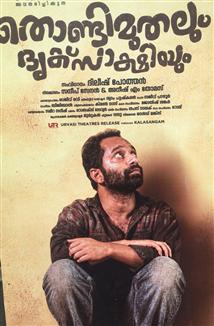