The official audio songs of actor Mohanlal's upcoming movie Munthirivallikal Thalirkkumbol was released recently. A total of 4 songs have been composed by M Jayachandran and Bijibal with lyrics by Rafeeq Ahmed, Madhu Vasudev and DB Ajith Kumar. This Jibu Jacob directorial has Meena playing the female lead and Mohanlal's wife in the movie. Bankrolled by Sophia Paul under the banner Weekend Blockbusters, the film is written by M. Sindhuraj and is expected to release on December 22, 2016. 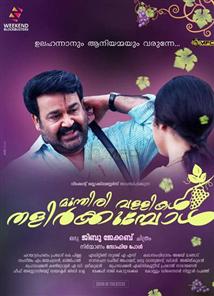