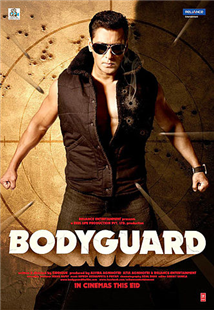 BODYGUARD works for varied reasons -- it has a simple, but captivating story with a dramatic twist in the tale, the chemistry between the lead actors is perfect and the music is well juxtaposed in the narrative. But its biggest USP is, without doubt, Salman Khan.(more)

It's Salman all the way with Kareena Kapoor bringing in the brilliance of Geet from JAB WE MET. Mention must be made of Tsunami, a character who entertains without being a jerk. Last Eid it was DABANGG, this Eid, it's BODYGUARD. A double whammy. (more)

Bodyguard is not Salman-y enough!

It's Salman's undeniable presence coupled with a rare ability to mock himself and Kareena's hard-hitting radiance in a role she would excel even if she sleepwalked through it that makes Bodyguard seem a tad better than it actually is.(more)

Bodyguard is endurable (and I say this without any condescension) for those who can forgive the haphazard story and be happy enjoying the songs and watching Salman and Kareena onscreen. (more)

Nothing much to offer

Only for diehard Salman Khan fans, Bodyguard has nothing to offer to the fastidious cineaste. Performance-wise, the film doesn't have much to boast about. (more)

No question it's going to make a lot of money at the box-office, but you have to be a die-hard fan to forgive this film its many flaws.(more)