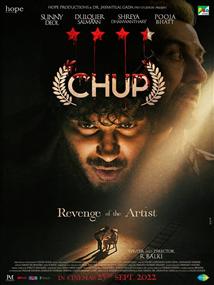 R. Balki's Love Letter To Cinema & Guru Dutt Is A Winsome Wild Idea With A Lot Of Merits

Chup comes from a team that immensely loves cinema and everything it represents, you must surrender to an idea that is untouched and brilliant. With some minor flaws, you should not miss watching his ode which is more than just a movie about a killer on loose.(more)

Dulquer Salmaan gives in his best to play a loner and a lover. One can see the actor�s struggle in juggling his complex character and he does a satisfactory job of it. Shreya Dhanwanthary (of Scam 1992 fame) is endearing as the woman in love but her role as a journalist doesn't give her much scope to perform. Sunny Deol makes a smashing comeback. He plays the smart and dedicated investigating officer quite well with the required restraint. And it feels good to see him team up with Pooja Bhatt, who leaves a mark even in her short yet significant role. She plays a fierbrand psychologist Zenobia - a strong and opinionated character that feels tailormade for her. The customary Amitabh Bachchan cameo in this Balki film doesn�t feel out of place either. Tamil actress Saranya Ponvannan�s character of Nila�s progressive mother is a hoot.(more)

Chup is a must watch in theatres. You will fall in love with Vishal Sinha's cinematography, fall harder for Dulquer Salmaan and comes out of the hall with a number of thoughts on art, "official validation" from critics, an if it is an audience that truly makes a movie if artistes seek so much of the former. R Balki's winsome movie despite its flaws makes you do all that with flourish.(more)

Film critics, beware. You're about to lose your organs

The dialogues have situational appeal, and lines such as 'Scorcese nahi Shetty' and 'Galti Se Tax' stand out. The editing is good as Chup doesn't drag. The romantic song featured in the film, however, could have been catchier. The other technical aspects are up to the mark. To sum up, Chup is a highly watchable and layered thriller that may 'silence' its critics, courtesy of its refreshing concept.(more)

CHUP is a unique tale which boasts of some fine performances.

CHUP starts on a thrilling note, with the murder of Nitin Srivastav. The way it�s executed, one can�t anticipate if it�s Nitin or his wife who�ll be killed. Danny and Nila�s entry scenes and the way they bump into each other are cute. The sequence where Arvind addresses the critics and industry members and the madness that ensues is hilarious. However, what takes the cake in the first half is when the lone critic bashes the film and the cops descend on his residence in full force. The intermission point is rocking. Post-interval, the film gets slow but a few scenes of Danny stand out. The finale is chilling.(more)

Chup is a muddle but certainly not of monumental proportions. That it ventures into uncharted territory is undeniably commendable. But it needed something more to elevate itself above a mere idiosyncratic concept.(more)