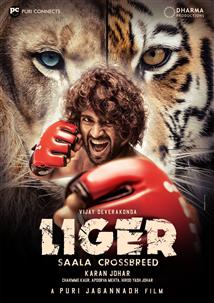 Unexpectedly bad outing for both Puri Jagannath the proven filmmaker and Vijay Deverakonda the likable youth icon. They've delivered a sports film with no soul.(more)

Liger also joins the long list of films that blame women for men getting distracted. The film makes us question if the team spent ample time writing the script. If only Puri Jagannadh, Charmme Kaur and Karan Johar had set aside half of the time and money for the script instead of the promotions, Liger could have been a much better film. If only(more)

Vijay Deverakonda film is a cringe-fest of mammoth proportions

The action, in the ring, and on a ranch, with well-known real-life MMA artist Mark Anderson, is about the only thing that you stay with. Deverakonda, never too far from his Arjun Reddy character, is all limber and loose-limbed, and makes us watch. But to have a character term his performance as �full paisa-vasool�? Basically, that�s �Liger� high-fiving �Liger�. Seriously?(more)

Indeed, that is where Liger begins to hover by the time it has run its course. It is massive mess of a movie that Vijay Deverakonda's newfangled physique and action chops cannot salvage. As for the other actors in the cast, they ham their way through and compete to outshout each other. Liger is a movie best avoided.(more)

liger does not live up to the hype created. A wafer-thin storyline, Vijay�s stammering act, and rushed proceedings are basic drawbacks. But there are a few good mass moments and Vijay�s transformation which will be loved by the B and C center audience making this film a strictly passable watch. All we suggest you is to go in with fewer expectations.(more)

It�s ironic that Liger is asked to focus multiple times in the film, but the script itself lacks the same focus. Things just keep happening for no rhyme or reason and Puri fails to deliver a satisfactory conclusion to any of the tracks. Vijay deserved better, so did we. As the filmmakers promised, watt laga diya, but not in a good way.(more)