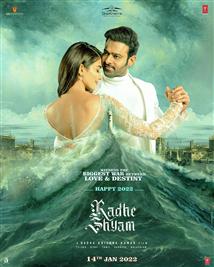 A Box Full Of Surprises!

Radhe Shyam is much more than just a visually rich romantic flick. Superlative writing at regular intervals keeps the curiosity alive and kicking for almost the entire film. Despite Prabhas being a spoilsport, the drama and emotions connect well.(more)

Radhe Shyam is an urban romantic drama with an interesting premise and grand visuals. Prabhas and Pooja Hegde shoulder the film with their sincere performances. But the slow narration, lack of strong drama and rushed climax spoil the mood a bit. (more)

Despite His Tremendous Screen Presence, Prabhas Is Reduced To Sub-Par

Radhe Shyam is prettified piffle that is sought to be palmed off as an earnest exploration of life and death, destiny and human endeavour, palmistry and science, and love and loss. Cinematographer Manoj Paramahamsa - besides lending a part of his name to a key character in the film - delivers unblemished and impressive compositions all right, but in the absence of a palpable and passable context for all the superficial 'beauty' that is on show, the undeniably good work that he and the visual effects team do is rendered ineffectual.(more)

Prabhas-starrer expects us to swallow, hook, line and so many sinkers, and we are constantly collecting our jaws off the floor.

Going by their unshakeable belief in 'haath ki lakeer', you wonder exactly what the purpose of this film is: is it to justify superstition? Because that�s really what it feels like. A refutation does come � humans make their own fate, everything is in their hands � but in a tearing hurry, and right at the end.(more)

A period romance bogged down by poor writing

The screenplay is cluttered with pointless moments and characters who don�t serve the story. Radhe Shyam has been shot on a grand scale in different parts of Europe, lending it a fairytale-like vibe. The music by Justin Prabhakaran also blends well with the story. The VFX team deserves applause for their work.(more)