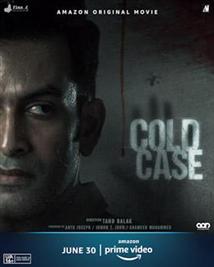 What makes Cold Case work (to a certain extent) is that it remains rather low key right from the beginning. Unlike many thrillers it doesn't hype things too much in the initial half and then disappoint in the climax with a 'meh' reveal. A couple of jump scares are nicely done and might have worked better in theatres. The cast does a neat job and everyone keeps it subtle. While 'Yaavarum Nalam/13B' might come to mind, 'Cold Case' is a lot more closer to 'Eeram' which too was a film about a paranormal force aiding in an investigation. (more)

One of the nicer aspects of Cold Case on Amazon Prime Video India is that Prithviraj has not used his clout to force his character into a position where he overpowers the narrative. (more)

Sreejith V Nath�s screenplay is moving and keeps a hold. But the credits go to not writing exactly, but the technical department. The film is held together by its engaging visuals and story treatment. The premise missed out on an innovative thought and is not impressive enough, ergo making it an average plot. (more)

Prithviraj has maintained the clich� style of a brilliant investigation officer throughout the movie. The storyline does not give the scope for a great performance to the actor like his police roles in the movies 'Mumbai Police' and 'Memories' .Aditi Balan has given justice to her role by presenting the two sides of her character as a single mother and a journalist.(more)