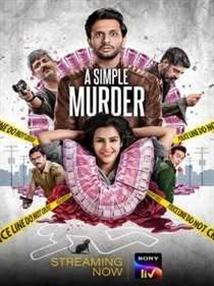 A Simple Murder is relatively simple for a black comedy that has multiple threads. This has worked in both ways for this series. While on one hand we hardly experience the turmoil that the primary characters go through, the compact nature of the episodes and the rather simple treatment makes this an easy watch. While we aren't sucked into the proceedings, it also turns out to be a harmless watch!(more)

In A Simple Murder, greed is anything but good, as everyone pays a price for succumbing to one of the seven deadly sins. In fact, there are enough betrayals and double-crosses in A Simple Murder to put Abbas - Mustan films to shame. The makers ensure that despite the overwhelming number of murders and other crimes in this series, the humour is never found wanting.(more)

Despite the murders and killings everywhere, thanks to the humorous storytelling, you don't get bothered by it. Akhilesh Joshi, the writer, it seems, is heavily inspired by the 1990s. (more)

Spirited caper that inspires fine performances from an ensemble cast

The infantile scenes of bungled police work aside, director Sachin Pathak stays loyal to the genre. Over seven episodes we move out of Manish and Richa's 1BHK onto a crazy ride, with the myriad characters brought together by a couple of cases of mistaken identity, a missing bag of money, and blinding greed. (more)

Mohd Zeeshan Ayyub Is Finally Getting What He Deserves!

It is very few times that we get to actually watch Dark Comedies when the makers are selling them with the tag. A Simple Murder is one of those.(more)