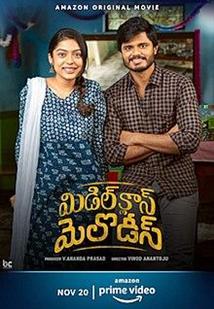 There is not a second of preachiness in this delightful comedy drama but there is a lot out there for us to take as well. There is this milkman character in the film who symbolises hope, gratitude and empathy. It is the sketching of these small characters that sets this film apart. The cinematography brings in that sort of a vibe which makes us feel a part of Guntur or atleast that feel of a bystander. So are the earthy songs. Goparaju Ramana as Raghava's caring yet intimidating father steals the show while Varsha Bollamma is effortlessly good. Just pointing out a couple but the performances from almost everyone is almost always good. (more)

Middle Class Melodies is a heartwarming drama, and it treats its world and characters with a great amount of verve and emotional heft, while never losing its touch with humour. (more)

Middle Class Melodies depends the most on its director and writer. Vinod Anantoju being in charge of the screenplay, makes it easier for him. There is not just one story or conflict. There is an entire village and approximately five families being shown here with their various struggles. It is not easy to bind all of this a 134 minutes feature film. (more)

A tale as comforting as delicious Bombay chutney

Middle Class Melodies is not without its flaws, it also seems to miss a secret ingredient that would make it great, but it refreshingly offers a peek into everyday lives of characters that are relatable. Because this film is not just about Raghava and his dream, even if that holds the story together. The best part about the film is that, it never overdoes on the emotions, keeping the humour and anger both natural.(more)

As the title suggests, Middle-Class Melodies is a film that depicts the issues that people deal with in their middle-Class lives. The setup, earthy characters, and emotions attached to each are nicely established. Credit goes to the director Vinod for keeping the characters true to themselves. The supporting cast plays a strong part and every track has a justification. (more)

To sum up, �Middle Class Melodies� hits the middle ground, it starts off well, loses track along the way, but ends as a decent entertainer. It will appeal to those who like to watch unhurried stories, which capture the life of a region. (more)