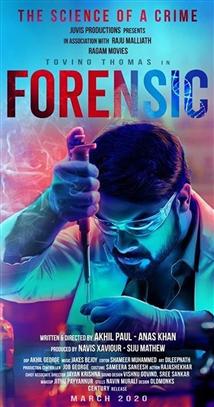 Forensic calls for a bit of a strength of the imagination, but if you get a kick out of putting on an investigator's hat to play a guessing game, this could be just the thing for you.(more)

Throwing a punch at patriarchy

On the one hand it holds the more widely palatable but disconcerting possibility of reconciliation, on the other is a simultaneous overriding assurance that it's not the same Amrita we are leaving the theatre with than the one introduced to us at the start.(more)

Forensic lacks the subtlety and finesse that separates the more effective police procedurals from the also-rans. (more)

This was really unnecessary, because Forensic is passable entertainment till then and some of the earlier unfolding twists are not half bad(more)

A solid thriller that gets the job done

It makes you think the main killer has been revealed just seconds before the intermission, but then it comes up with more surprises in its second half. And do I really need to say how good Jakes Bejoy's background score is? Forensic is another decent addition to the growing roster of thrillers in Malayalam cinema this year. (more)

This Tovino Thomas Starring Crime Thriller Is Different Yet Appealing!

Forensic is a different yet appealing crime thriller that will keep the audiences engaged, despite having a few flaws. Watch this Tovino Thomas starrer if you love edge-of-the-seat thrillers(more)

The film has some great ideas that it struggles to translate into visuals, and the bulk of the story is told through expository dialogue. (more)

An average thriller with plenty of loopholes!

Forensic may not be perfect but can qualify as a decent thriller. There are some disturbing scenes and be ready for it, while going for this one. (more)

Forensic is a neatly-written procedural with fairly surprising twists and turns. A decent watch

Forensic is spiritually similar to middling works such as Anjaam Pathira which places familiar cinematic gimmicks above great writing that takes the audience by surprise and smart filmmaking. And moreover, a striking sense of misanthropy overshadows the pursuit of justice at the core of these films. (more)