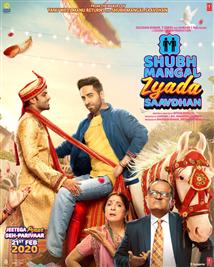 Shubh Mangal Zyada Saavdhan is a clean winner that's audaciously progressive, got crackling humour and hits it all out of the park! The leads shine throughout and so does the characters in the family!(more)

Ayushmann and Jitendra steal the show

'SMZS' will give small-town parents the much needed nudge, and maybe, in the distant future, they will have the strength to accept their offsprings for who they are. But, for now, watch it for the performances and the 'chaska' of love, with two men pouring their hearts out for the world to see and accept.(more)

The film may be erratic in parts, but its entertainment quotient is delightfully high for a film tackling a clash between conservatism and freedom, between tradition and modernity.(more)

Ayushmann Khurrana stars in an important film that talks about an important subject conveyed in the simplest manner without sounding preachy at any given point.(more)

SMZS is funny, brave, smart and thoughtful, and Kewalya is a voice worth listening to.(more)