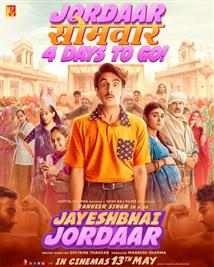 Ranveer is a firecracker, but the film lacks spark

For the longest time Hindi films have worshiped alpha males. Divyang hopes to turn that template around and question false bravado through his timid but determined hero. He also tries to take a light-hearted look at grim issues, but uninspiring writing lets his film down by a mile.(more)

Jayeshbhai Jordaar is Ranveer Singh all the way, so it is far more Jayeshbhai than jordaar. It loses power far too frequently. The load that the star is called upon to carry on his shoulders is flaky and flimsy at the core notwithstanding the undeniable relevance of the ideas that the film is seeking to peddle.(more)

Ranveer Singh Gifts Everyone A 'Pappii�'& A Wholesome Warm Hug Making You Laugh While You Think!

Jayeshbai Jordaar doesn't address an 'outdated subject' it picks up an issue tackled before adding its own charm, humour, 'pappi-worthy' emotions & 'oh so amazing'performances by Ranveer, Jia.(more)

Ranveer Singh's arresting presence and investment in his character cannot save Jayeshbhai Jordaar from its writing and direction, both of which feature none of the jor contained in its title. (more)