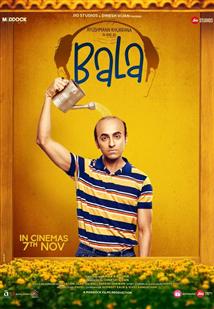 Amar Kaushik and his writer Niren Bhatt have gone about their task with a lot of care, evident from the way they have focused on characterizations, including certain traits developed and made visible. Along with characterizations it�s also clear that the writing works to a major extent thanks to the dialogues, witty at times, hard hitting at times and even exhibiting subtlety at certain places. Speaking of dialogues, it�s nice to know that not all the sparking lines are reserved for the leading man alone.(more)

BALA not only entertains thoroughly but also delivers a very important message that will surely be lapped up by the audiences.

Anuj Rakesh Dhawan's cinematography is neat and captures the small town goings on well. Preetisheel Singh's makeup and prosthetics is flawless. Sheetal Sharma's costumes are straight out of life. Mayur Sharma's production design adds to the authenticity. Hemanti Sarkar's editing is slick and yet unhurried. (more)

'Bala' remains a light-hearted comedy with situations that are relatable. Just like the film's message, 'Bala' is beautiful even with its flaws, and never fails to entertain.(more)

Bala is not just a celebration of Bollywood but also its critique, which questions the stereotypes set by our cinema about beauty. The film exudes a feel-good warmth you were waiting for, for so long. For those who dare to compare it with Ujda Chaman, one request: please do not. Just don't do it. The Abhishek Pathak film is no competition to this artistic creation by Amar Kaushik.(more)

Ayushmann Khurrana's Bala is an achievement. He's perfected the art of playing people who are not instantly likeable, and he works the characters� kinks to the point where we can see them, and yet sympathise.(more)

Ayushmann-Bhumi crackle and pop while slamming bias...till the film reveals its own prejudice

Bala would have been near perfect. There is a Latika though and the humour does dip, making Bala a 50-50.(more)

Ayushmann Khurrana's Film Is Laced With Wit And Humour

Bala benefits no end from the quality of the performances as well as from its empathy for the idiosyncrasies of small town folk, but it is the writing that is its Samson's hair: the film's power flows principally from it. The screenplay is indeed King here. Yes, with a capital K.(more)

This Ayushmann Khurrana starrer is equally hilarious and heartfelt

'Bala' is one crowd-pleasing, feel-good movie that starts off with a laugh, and ends on a heartwarming note. It is sometimes crude, sometimes predictable, but the film has a likable cast and delivers some poignant messages about self-love, acceptance, companionship and of course, bald is beautiful.(more)

A hollow film combed over with humour

The film could have either completely done away with her or bothered to include her holistically. She only comes in to preach and make a point. It doesn't help that Pednekar's cosmetically darkened skin keeps changing in tone through the film, almost as a constant reminder that it's not her natural skin colour. If the film is attempting to be 'woke' in content, there's no reason why it can't in casting as well. Pednekar, by no means, is irreplaceable for the character of Latika.(more)