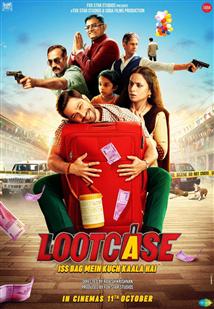 A quirky yet simple comedy that packs in sufficient laughs

Lootcase is enjoyable right through and is certainly one of the better comedies in recent memory. At times you might feel that nothing much happens with Nandan being content with just hiding the money but that is the whole point as well. He isn't able to tase something despite being in possession of it. You do feel a bit of a lull towards the later half but then things pick up nicely reaching a crescendo of sorts.(more)

A 'loot' of good performances and an average script

'Lootcase' is an earnest effort with regards to two things: bring to light the travesty of greed, and life in general. But, with the writers, Kapil Sawant and Rajesh Krishnan, falling prey to the need to take the safe route and inculcate the tried-and-tested formulas of this genre.(more)

Lootcase with an improvised and intelligent script could have turned out to be one of my all-time favourite comedy films, but it ended up as a one time watch. Yet, such a simple film could mean much more when people are stuck on their couches and just want to be entertained.(more)

You'll Root For Everyone In This Loot-CHASE!

Lootcase provides you with that. It's refreshing to see black comedy as we see in series like Fargo is shown, with no objections. So don't think twice and keep your snacks ready to enjoy and root for this loot-chase!(more)

"Lootcase" is not perfect or extraordinary in any way but the film's best bits are its little throwaway moments and there are plenty of those.(more)

The length of the film begins weighing upon the plot, which starts stretching and flattening. A crisper plot and faster pace would have made Lootcase what it was aiming to be. (more)

Kunal Kemmu is undoubtedly the star of the film. He looks dapper even as a simpleton and has truth in his eyes, even when he steals. He gets into the skin of his character and makes it look effortless. The actor plays a doting dad, a loving husband and an aam aadmi with chhote chhote sapne and scores full marks. (more)

A comedy-riot that's worth the time

Lootcase throws a barrage of well-timed on-liners and situational comedy. Debutant director Rajesh Krishnan reminds you of the time Bollywood gave space and recognition to films such as Khosla ka Ghosla. Lootcase is inevitably a blissful comedy that the audience will prefer to relish sipping through during a time when dark comedy and violence driven films have made merry at the box office.(more)