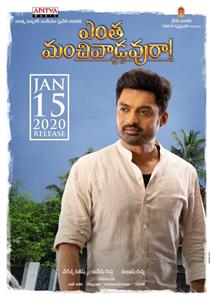 A significant part of the film is shot in Kerala, and the lush green fields of Konaseema. As soothing as it is to see so much greenery on screen, there is another thing one should not forget: eating too many pootharekulu makes you want to give up on sweets for a long time. And someone clearly forgot about this while writing and making this film.(more)

Entha Manchivadauraa is an emotional drama with a good point and some decent family moments. It is the second half which goes for a toss as the proceedings get sidetrack. Kalyan Ram's role, Vennela Kishore's comedy are the basic assets and keeps the audience engaged at regular intervals. But the slow pace and routine narration spoil the mood. Not that the film is bad but there are not many exciting moments in the film which makes it just a passable and routine watch this Sankranthi.(more)

Entha Manchivaadavura's drawback is the way it's written. The film, like most of Satish's films, sound like a moral class more than cinema. The director tries to pull off too many elements that don't work. Despite the flaws Entha Manchivaadavura can be classified as a Manchi film so give it a try if such films are your thing.(more)

With the film moving slower than snail's pace, our levels of patience decrease. Filled with clich�d moments and lethargic narration, the family drama puts us in sleeping mode. The less said about the second half the better.(more)