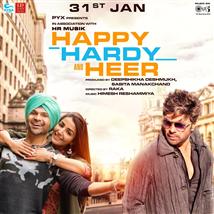 Happy Hardy And Heer is an extended music video

Heer mentions in one of the scenes that Hardy is an 'over-actor' as much as his doppelganger. We can't agree more. Now the question is: Should you watch this? Make an informed and wise decision, we suggest.(more)

Teri Meri Kahani (sung by Himesh and Ranu Mondal), Ishqbaaziyaan and Duggi are among the songs from the film that stand out. There�s also a throwback track in the form of the recreated version of Ashiqui Mein Teri, which originally featured in 36 China Town. Like every Himesh film, the music of �Happy Hardy And Heer' is its USP, and adds to its entertainment value.(more)

Happy Hardy And Heer is just yet another Himesh Reshammiya film which hardly makes any sense about why it even exists. Not a single thing which helped me to recommend this film. Skip it with a smile!(more)