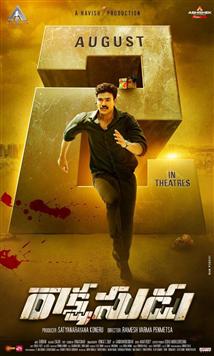 'Rakshasudu' keeps you guessing at all times and as a viewer, you feel engrossed every minute of the film. While watching a thriller, you can't ask for anything more

When Ramesh Varma decided to remake a thriller like Ratsasan, there were lofty expectations, but the director sails through and hits the mark with this film. While thrillers run the risk of getting too predictable, Rakshasudu keeps you guessing at all times and as a viewer, you feel engrossed every minute of the film. While watching a thriller, you can't ask for anything more.(more)

Killer on the loose

Rakshasudu has a lot going for it, despite a few convenient coincidences. There's enough drama to keep us on the edge, but a little tightening would have made the film even better. When the pin-drop silence in the hall is shattered by loud cheers as the puzzle is solved and ego-ridden personalities are shown their place, you know the narrative has kept its audience hooked.(more)

This Bellamkonda Sai Sreenivas-starrer is a well made Ratsasan remake

Rakshasudu is a story about people who are humiliated, pushed to their extreme, and how they react to it. While Arun channelises his frustration into something constructive, the humiliation has the opposite effect on the villain. He becomes a demon, who stops at nothing from terrorising everyone around him. They say that fear comes in many forms. Ram Kumar focuses the story on one such person who flipped to the dark side because no one empathised with him.(more)

Rakshasudu is a fairly captivating serial-killer thriller with some edge of the seat moments. Aided by Ghibra's music and sound design, the film provides enough thrills. It makes an interesting watch.(more)

A Stunning Thriller That Hardly Allows You To Breathe A Sigh Of Relief!

Rakshasudu is a complete winner that has lived up to the expectations placed on it. It offers an edge-of-the-seat experience never seen before in Telugu cinema.(more)

Rakshasudu will give Bellamkonda Srinivas the much needed break which he was eagerly waiting for. The film has a decent premise and taut narration filled with good suspense makes the movie watching experience enjoyable. Thriller movie fans will love the film and the rest will find it decent. Recommended.(more)

Rakshasudu is a near-perfect remake of Tamil blockbuster hit Ratsasan. Barring the momentum, the film is a kickass thriller for those who haven't seen the Tamil original. Bellamkonda Sai Sreenivas's Rakshasudu is a frame-to-frame remake of Tamil film Ratsasan. While the cop-thriller shows lazy filmmaking in parts, it still keeps you engrossed in the proceedings.(more)

Director Ramesh Varma has been very loyal to the material and vision of his compatriot Ram Kumar while making the Telugu remake. It is an almost frame to frame remake as Varma has even matched the camera angles and movements with the original film. The Telugu remake could have avoided the mistakes of the Tamil film, especially a melody number in the middle of a high-stake situation is so illogical.(more)

Despite some flaws, and weak romantic episode between hero and heroine, "Rakshasudu" doesn't deviate from the basic thread and is focused on telling it in genre-specific way. If you have watched the Tamil film, it may not impress you but those who watch it in Telugu for the first time, it will definitely grip you.(more)