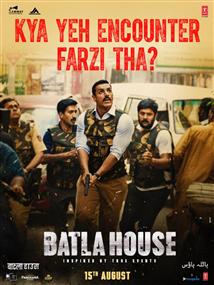 Where the truth lies

Speaking of the visual symbols piling on, in yet another shot, we see what cop's nightmares are made of � getting weighed down by a crowd of people wearing ominous skull caps. Is it any surprise then that the film also underscores the emerging narrative of the times, about the supposedly short-sighted 'appeasement of the minorities' approach of yore. Neither himayat (taking side), nor mukhalfat (opposing) of the qaum (community) is the prescribed way out. Alright then.(more)

In a powerful melodramatic motif, Abraham keeps rubbing his medal, imagining it to be blood-stained, a la Lady Macbeth. At one point he asks if there has ever been another police encounter where an Inspector has been shot � a tacit suggestion that other encounters without slain cops are mostly staged. His legal defence intriguingly includes the phrase "binary opposition," but doesn't move beyond a mention. There was merit to the idea, but I wish they'd rubbed at it harder..(more)

John Abraham film is an excellent concept but poorly executed

Very clearly, the film is a John Abraham star vehicle. Yet, the only reason the actor towers over the movie, Thanos-like, is because the film lacks a memorable supporting cast. Neither the policemen, nor the brainwashed terrorists nor the lawyers. Not one of these characters develop over the film's five-year timespan. The camaraderie among the policemen is absent. The marital tension is unconvincing. The premise for the ACP's post traumatic stress disorder is implausible. His mental health issues are hurriedly resolved in a single session with a psychiatrist.(more)

Despite some of the flaws, 'Batla House' makes for a gripping, intense watch.

But there is no doubt this is John Abraham's film all the way, he is well cast in the role of a committed ACP, who is a man of few words, and arguably gives his career's best so far.Even his strained relationship with his wife Nandita (Mrunal Thakur) and his internal angst are etched out effectively. It's an all-consuming role and John Abraham nails the body language and the intensity.Ravi Kishan as Inspector Kishan Kumar Verma and Mrunal Thakur are well cast though Rajesh Sharma as the defence lawyer (in a wig that is an eye sore), comes across as over dramatic.(more)

Batla House held together by a steady and solid star turn by John Abraham, leaves you with a feeling that it had the potential to be an absolute humdinger. But stray flashes apart, the dramatised true story drifts too far from the heart of the matter without delivering the expected drama. All said and done, the lead actor delivers, so his fans have no reason not to watch Batla House.(more)

BATLA HOUSE is a powerful saga which is sure to spark off discussions and debates. The relevant plot, watertight screenplay, clapworthy moments and terrific performance by John Abraham makes BATLA HOUSE one of the finest films of the year.(more)

Informs You, Compels You, Grips You In An Entertaining Way!

Batla House gains all the marks in keeping us thrilled till the end. John Abraham's flawless performance, Nikkhil Advani's effortless direction and Ritesh Shah�s absorbing story help the story to flourish in its own enthralling way. Informs you things in an exciting manner!(more)