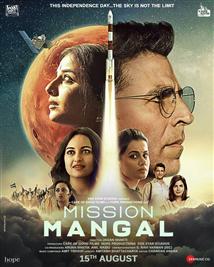 Mission Mangal ultimately may not make for a path breaking film on a pioneering space mission, but it is entertaining and makes for a relatively easy watch on the big screen.(more)

Akshay Kumar film leaves a smile on the face

It leaves a smile on the face. And you do feel a swell of pride as the 'yaan' comes into view and settles successfully in orbit. Despite the over-arching presence of the latter-day Mr India, 'sab mangal hai'.(more)

Under the vision of creative director R Balki and an average execution by filmmaker Jagan Shakti, 'Mission Mangal' makes good with its emotional highs and drama.

Under the vision of creative director R Balki and an average execution by filmmaker Jagan Shakti, 'Mission Mangal' makes good with its emotional highs and drama. In the end, when you see India's scientists celebrate their hard-earned victory with the Mangalyaan orbiting Mars, you can't help but cheer for the triumph of a nation and its scientific success. Despite the ups and downs, this story does make you believe that dreams do come true, especially in the vast expanses of the outer space.(more)

The 5 Actresses Outshine Everything Else In Akshay Kumar's Film

Ultimately it's a consummate Vidya Balan who rises above everything else and, thankfully, makes Mission Mangal all about a good-hearted matriarch instead of a patronising patriarch.(more)

Vidya Balan and Akshay Kumar carry off an oversimplified film

The Mangalyaan had stunned the world. American publications put out racist cartoons about this third-world nation knocking on the doors of their exclusive cigars-and-planets club. We were incensed, and rightly so. Now in Mission Mangal � starring Akshay Kumar (one of our least hidden figures) and a shiny tinfoil version of ISRO that often looks like a lavish backdrop to a Rajinikanth song � we applaud a Prime Minister who had very little to do with supporting the mission. The message is clear: We shall create our own cartoons, thank you very much. Make in India.(more)

Despite its flaws of excessive sermons and some crucial characters like Taapsee and Kirti not fleshed out completely, Mission Mangal makes for an entertaining Independence Day watch. That seems to be how the director intended it as well, a space-entertainer, rather than a hardcore scientific film. The flight might face some turbulence but it lands well.(more)

Mission Mangal is sure to strike the right chords in your Dil, Try not to miss!

The film teaches one that one can achieve their dreams despite any ups and downs in life. With its emotional highs, one can't help themselves but cheer up for the victory of an entire nation at the end seeing the scientists who had worked this hard celebrate! Mission Mangal is an ideal movie that makes a sure watch this Independence Day!(more)