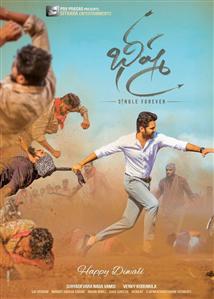 A reasonably fun outing from Nithiin and Rashmika Mandanna

Bheeshma is not the smartest film around but is reasonably entertaining. Like the hero says, "haasam" � not awesome but there's haasyam (humour), even if not all of it is politically correct.(more)

Venky Kudumula doing what he does best

Bheeshma a chance is a no-brainer (pun intended). Just don't go expecting something even remotely sane or novel and you won't be disappointed.(more)

A Perfect entertainer with an important lesson which you won�t regret watching with your friends and family this Mahashivratri weekend.(more)

Bheeshma packs in plenty of laughs and, at the same time, manages to keep itself relevant with its discourse on organic farming. After all, the film adheres to one of the crucial principles of Telugu cinema � When you have a decent enough script, all you have to do is try hard enough not to ruin it.(more)

Bheeshma is romantic comedy which has well packaged entertainment thrown at regular intervals. Clean comedy, good performances and breezy narration are huge assets of this film. Nithin will get his much deserved hit he was looking for. Except for a simple story line and some over the top scenes, this film has some good moments for the entire family to watch out for. Recommended.(more)

A fun ride with a different execution!

Bheeshma is a fun film coated with good message. The entertaining first half and somewhat serious second half is the film's combination. Director Venky Kudumula managed to narrate the predictable scenes in a funny manner. The fun ride is definitely a worth watch during Shivratri weekend.(more)

Bheeshma is a script that depends heavily on entertainment and the story has universal acceptability for all kinds of audience. Plus points are lead pair, entertainment and the basic plot. On the flipside, one wonders what made Anant Nag choose hero for such a critical job. Though it has an uneven tempo, the regular dosage of comedy makes sure that we do not complain. This film will definitely give a breather to hero Nithin who has had a bad streak in the recent past. You may watch it for entertainment.(more)

'Bheeshma' provides a good time pass entertainment. More than the plotline, comedy portions have worked out well. Despite predictable screenplay and uneven first half, the post-interval scenes and Nithin's comedy act make it a fun watch.(more)

'Bheeshma' is sprinkled with a good dose of comedy in the second half. It provides time pass moments. It is a lighter vein romantic-comedy.(more)