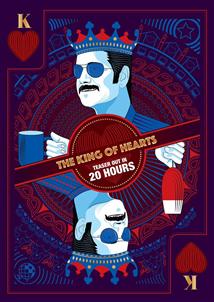 The director missed a trick or two with the climax but gets almost everything else bang on, ensuring a hilarious entertainer that you wouldn't mind watching on repeat. Too much of something can be an overkill, they often say. But when it comes to Vennela Kishore's comedy in Manmadhudu 2, that doesn't ring true. In fact, it only leaves you wanting for more. (more)

This could have been a meaningful drama about toxic relationships, but Rahul Ravindran does not quite dig deep into that aspect of the film. This could also have been a film about a man who is afraid of breakups because that seems more unbearable than being lonely, but we do not see enough of that. This could have been about a family trying to make Sam understand the meaning of happiness and companionship, but all we get to see is a bunch of them trying all sorts of things to convince Sam, except for pouring their hearts out to him directly. Manmadhudu 2 could have been so much more than what it is but it ends up nowhere(more)

Manmadhudu 2, directed by Rahul Ravindran, aims to be a breezy entertainer but it barely scratches the surface. Witty one-liners and a handful of neatly crafted moments are the only takeaways from Manmadhudu 2.(more)

Manmadhudu 2 is a faithful remake of the French movie I Do and like the original French drama, this one too has entirely predictable narration from start to finish and tests the patience with sloppy sentiment scenes, adult jokes and lousy treatment.(more)

Something amiss in this rom-com

Manmadhudu 2 had the potential to be a lot more interesting. At the time of filing this review, news trickled in that Rahul Ravindran won the National Award for Best Original Screenplay for his directorial debut, Chi la Sow. That was a heartwarming film, and an emphatic statement of Rahul's potential as a writer and director. Manmadhudu 2 doesn't live up to that promise and here's hoping that with the next one, Rahul will be back in form.(more)

Manmadhudu 2 is not only bad sequel (if it is) to 'Manmadhudu' but also bad remake of the French movie "I Do" and it is a misfire.(more)

Manmadhudu 2 surely does live up to the hype and expectations created. Nagarjuna and Rakul Preet manage things well but the weak second half and routine story take things down. The comedy punches by Vennela Kishore work well but the rest of the emotions don't as the film does not have entertaining proceedings which light you up and ends as a strictly okay watch this weekend. All we suggest you is to keep you expectations low(more)